When Roman’s daughter and unborn grandchild are killed in a plane crash, he seeks revenge against those responsible, leading him to the air traffic controller who oversaw the disaster.

It’s appropriate that this is about a plane crash, because that’s a fitting analogy for the film itself. From this plot, DVD case and tagline, and the fact it stars Arnold Schwarzenegger, you may be forgiven for expecting a loud action movie. Arnie dealing out revenge for his daughter – isn’t that the plot of Commando? But this is post-governor Arnie, so the only foe he takes on is corporate negligence, and that’s just about as exciting as it sounds.

There’s scene after scene of both Arnie and the air traffic controller responsible for the accident (Scoot McNairy) trying to deal with what happened. The ones with McNairy are stronger, since he successfully captures the requisite grief , but overall it’s a pretty lacking affair, not helped by uninspired direction.

Ever since his post-gubernatorial return to acting, Schwarzenegger has been desperate to prove he’s a Serious Actor, perhaps understanding that his days as an action hero are limited. As a result he’s been in films such as Sabotage and Maggie which have been much more sombre in tone than most of his early career. In both of those he at least managed to turn out an authentic performance. In Aftermath he is just terrible. And while Arnie being terrible might be nothing new, never before has he actually been boring.

The fact he is the driving force behind these films, producing both Maggie and Aftermath, may be largely to blame. You only need to look at Schwarzenegger’s personal life to see that emotional intelligence is not his strong suit. He seems to think that the only way to show emotion in a film is to be in a sad, slow, depressing movie where your whole family dies. Either that or he doesn’t care about the overall quality of the film and just wants to be seen to be giving a serious performance.

In actual fact, if he wants to prove his acting skills, he’d be better off appearing in a well-directed action, comedy or really any other genre of film which isn’t slow and depressing. The best performance of his career was Terminator 2, an action film where he played a robot with a great deal of emotional depth, an outstanding physical performance and very well-judged comedy. 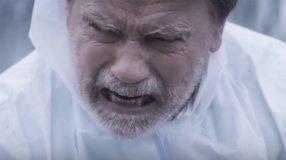 But he seems to think that emotions are boring, so boring films are what’s needed. He’s apparently hoping that these self-produced efforts will get him spotted as a great actor and make him the new Christoph Waltz. If that’s his hope, it may be one feat too great for the multimillionaire, former Mr Universe movie legend, who here appears gormless and confused.

It’s easy to see why Aftermath didn’t get a wide release in cinemas. Anyone showing a film branded like an action film, but with such boring and pointless content as this, is going to end up giving people their money back. Certainly if the number of people who walked out of the screening of Maggie I went to is anything to go by. When Aftermath was released in April, I couldn’t find a cinema that would show it.

This is another critical and commercial miss for Schwarzenegger, who can’t seem to find his feet in his post-politics world. I only watched it because I’ve seen every other film Schwarzenegger has been in. But with Maggie, Terminator Genysis and now Aftermath, I may have to call it a day.

One response to “Aftermath”