Someone’s dummy starts to take over their life in Magic: The Melania Trump Story.

Despite appearances, 1978’s Magic is not a haunted doll movie (Annabelle, The Boy, that episode of Buffy) but a remake-of-Psycho movie (Raising Cain, Maniac, that remake of Psycho). Anthony Hopkins plays Corky, a TV ventriloquist who retreats to a cabin to have a breakdown and stalk his now-married high school crush Peggy (Ann-Margret), who soon finds herself in a four-way relationship.

This is at once a tragic love story and the tale of a man having the most absurd breakdown imaginable; a C-list celebrity running away with his doll sidekick that he thinks is real. It’s like watching Neil Buchanan arguing with The Head when they’re alone. The B-movie premise is played more or less straight by Hopkins, director Richard Attenborough and Jerry Goldsmith, whose score makes great use of harmonica to represent Fats the dummy.

Ridiculous as it may be, this psychological thriller works because it’s weirdly intense and makes Fats feel real. Although he’s all in Corky’s head (presumably), Fats feels like his own character, like Psycho with a dummy instead of a mummy. His creepily lifelike behaviour is impressive considering he talks exclusively in foul-mouthed dummy-isms and doesn’t move without Corky’s manipulation. Until he does.

While some sequences are scarily tense, others are downright silly; one scene where Burgess Meredith challenges Corky to make Fats shut up for five minutes could be straight out of Split. But Attenborough is far more successful at being Hitchcock than M. Night Shyamalan could ever imagine, although that’s not saying much judging by the level of imagination on display in most Shyamalan movies. 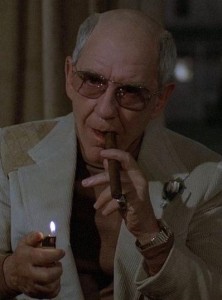 Attenborough makes Child’s Play look like child’s play. His classical treatment of William Goldman’s screenplay (based on his novel) makes for a wonderfully weird and romantic combination; The Man With Two Brains as directed by Alfred Hitchcock. Meanwhile Hopkins, having studied ventriloquism for the role, gives a fanstastically Anthony Perkins-esque performance that’s both intense and sympathetic. Plus there are brilliant supporting turns from Burgess Meredith and Ann-Margret, who at various points seems like she’s in love with the doll.

Through committed performances, intense direction and a memorable ending, Magic is exactly that.