Somehow Cabaret has always passed me by – in fact I typically confuse it with Chicago, which I’ve also never seen. But after 26 years of ignorance, Dan was kind enough to get it for me for Christmas. But is life a cabaret, or is that one of the lies o’ Minnelli? 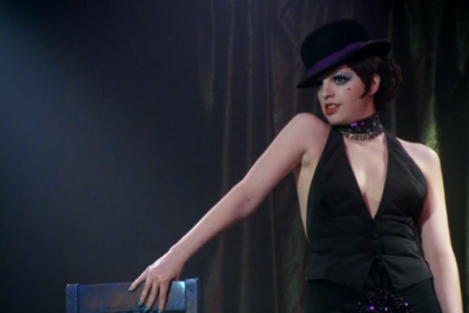 The film showcases the legendary nightlife of Weimar Germany against the backdrop of ascendant Nazism, with its spotlight on the relationship between cabaret star Sally Bowles (Liza Minnelli), her roommate and writer from England Michael (Brian Roberts) and friend Maximilian (Helmut Griem).

Miles ahead of its time in its representation of sexual orientation, Cabaret deservedly pipped The Godfather to a number of Oscars (and I love The Godfather). The unconventional relationship between Max and Sally seems somewhat similar to that of Holly and Paul in Breakfast at Tiffany’s,  but with an added element of possible bisexuality. And with socially progressive values in place of hardcore racism.

The crazy, flamboyant and sexually liberal world of the underground cabaret scene stands in stark contrast to the flashes of violence by  swasktika-clad men to which the characters remain largely oblivious or in denial. As such it’s actually a surprisingly interesting film with regards to the rise of the Nazis. By not being at the forefront of the film, we actually get an interesting insight into the attitudes of certain sections of German society and the complacency that allowed tyranny to rise.

Director Bob Fosse, who also takes a choreography credit, infuses the quirkiness for which he was known in his dance work to the dialogue scenes and musical numbers alike. Much like Singin’ In the Rain, I realised midway through that while I hadn’t seen the film before, I recognised almost all of its songs, such is their power, catchiness and cultural permeation.

Unlike many musicals, the music is incidental to the plot. The characters don’t burst into song at random moments with perfectly formed lyrics about their innermost feelings. The music comes from the cabaret club which provides welcome levity from the heavy drama. As a result, it’s far more naturalistic than most musicals, never taking you out of the moment. For a Berlin-set musical made in English, it manages a striking degree of authenticity.

Liza Minelli gives a stunning breakout performance that would catapult her to global fame and help her to leap out of her illustrious mother’s shadow. Roberts is also superb opposite her, unfortunately never attaining the fame his talent should entitle him to (although he did star opposite Burt Lancaster in The Island of Dr Moreau)

And in celebration of the film’s impact on LGBT culture, here’s Jinkx and Alaska singing Cabaret, both as Liza. Enjoy!