Christina Aguilera is Ali, a fresh off the bus singer looking to make it big in LA. There she stumbles into a burlesque club and sets her sights on becoming a performer there, but first she must impress the club owner Tess (Cher).

Most of the remaining plot is split in two as Ali tries to make it big as a singer, like 2018’s A Star is Born, and Tess fights to save the theatre, like 2011’s The Muppets. The fact Ali’s side of the story is detached from the Tess plot makes this a slightly odd film, although not an altogether unenjoyable one. There are numerous very fun musical numbers which seek to do for burlesque what Pitch Perfect did for fat jokes. 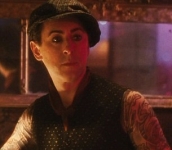 Their relationship is at least refreshing because it’s rare a lady in a film goes after a man she initially thought was gay, and his meterosexuality continues throughout, as he notices her shoes and even grinds his own coffee beans.

Christina Aguilera isn’t the world’s best actor, channeling Kaley Cuoco, and Cher is only passable, and is less Moonstruck than she is Morticia. Both of them deliver on the musical numbers, though, and Aguilera really does have a voice to match the esteem in which the other characters hold her.

Confusingly a key plot point is that she has to convince the club to allow live singing, when Cher is clearly singing in Cher’s voice throughout. Unless she’s lip-syncing to a fictional artist in this world who sounds exactly like Cher. But it’s great to hear her belt out a tune, and thankfully she features more heavily than in Mamma Mia: Here We Go Again.

The low point is when Ali becomes romantically entangled with the film’s main villain Sean (Stanley Tucci) after he buys her a pair of Louis Vuittons, with the screenwriters apparently unaware that this makes us not like her. So for a guide on quality, it’s not as good as Magic Mike, A Star is Born, Cabaret, Moonstruck or Saturday Night Fever but it’s better than Mamma Mia: Here We Go Again, Pitch Perfect, Showgirls and Stayin’ Alive.

One response to “Burlesque”