At the beginning of The Strangers, Kristen (Liv Tyler) looks a bit scared at the prospect of getting married, and continues to look a bit scared over the next 85 minutes. She rejects James’ (Scott Speedman) proposal and hides away in their remote summer home, when suddenly there’s a knock at the door…

This 2008 home invasion flick claims to be “Inspired by true events,” even though it’s neither true nor inspired. Insipid, sure, but not inspired. One wonders what drew Tyler to the project in the first place. The tired premise? The nonsensical script? The useless characters? Kristen might be the biggest wet blanket in horror history, wandering around whimpering “James!” like the most pathetic of Bond girls.

The couple are easy pickings for the masked attackers, one of whom has a sack on his head, which also happens to be the best way to watch the movie. Their only motive for tormenting the pair? “Because you were home.” What if they hadn’t been? On to the next isolated country house? Or just sack it off? But they got lucky, because not only are James and Kristen home, they don’t even put up a fight. Not so much as a kick to the sack.

Spoilers ahead, although not really because it’s obvious from the outset that James and Kristen are destined to end the film as a gaudy new paint job for their own front room. You get so bored of waiting for their deaths that you end up ready for your own, in a film so depressing it makes Funny Games look, you know, funny. 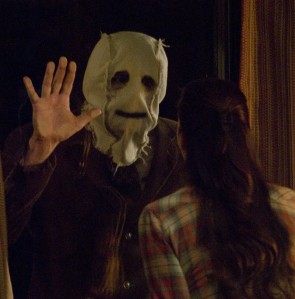 At least Haneke’s picture had a point of view, some wit and a level of technical expertise. Conversely this appears to have been edited by someone with a sack on their head, leaving the movie full of mistakes. If the attackers have no motive whatsoever, why would they change Kristen’s clothes? And as for whoever’s responsible for the awful score, they deserve the sack.

Having run outside for no reason and fallen straight into a ditch, Kristen spends most of the movie either crawling or hopping, so she’s hardly a match for old Sackhead and his pals. But after committing the world’s most straightforward murder, one of the attackers utters the final line of the film: “It’ll be easier next time.” You think that was hard? Try sitting through The Strangers.

One response to “The Strangers”