When corruption allegations surface following a drug trial gone wrong, hotshot lawyer Ben Cahill (Josh Duhamel) files a suit against big pharma CEO Arthur Denning (Anthony Hopkins) contrary to the advice of the head of his law firm (Al Pacino). But there’s a problem. He got the evidence illegally following an extramarital affair with Emily Hynes (Malin Akerman), who just-so-happens to be Denning’s girlfriend.

The twisty turny plot, while daft, is actually rather entertaining, and is certainly more watertight than Fracture, the last latter-day Hopkins thriller I reviewed. But a film ostensibly about the fallout from failed clinical trials uses this as a mere pretext for a thriller which hinges on the dynamics between its poorly-drawn and unlikable characters. This is particularly true of the two-dimensional female characters on whom so much of the film hinges.

In my review of Fracture I complained that the actor playing Hopkins’ wife was some 27 years younger than him. But Misconduct overestimates Anthony Hopkins’ sex appeal further still, casting a woman a staggering 41 years his junior as his girlfriend. I’m beginning to wonder if he has it written into his contracts. 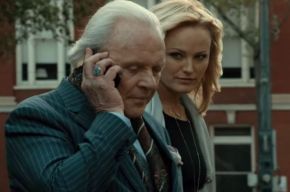 “Can you call me back? I’m with my granddau…I mean girlfriend”

It’s not that having a young woman with a much older man in a film is always wrong, but there should really be some reason for it, like in Phantom Thread, or a biopic of Woody Allen. In Misconduct it’s just weird, particularly since it was released in 2016. But the terrible attitude to women goes beyond their age and vacuity. In one scene a dead woman is shown in a revealing see-through top for all the necrophiles in the audience. Maybe it should have been called Gross Misconduct.

The dialogue is a series of schlock movie clichés, but even with that in mind Hopkins is on an off day. The rest of the cast fail to inspire, and Pacino gives the only committed performance in the film. Even the cinematography is questionable, with bizarrely framed shots that look like something from Terrible Real Estate Photos. As a result, misconduct is a misfire.

Off with their heads!

One response to “Misconduct”