Written by The Who and director Ken Russell, Tommy is a 1975 rock opera (meaning the whole this is sung, or rather yelled) about a deaf, dumb and blind pinball champion played by Roger Daltrey, who says plenty of dumb stuff himself. 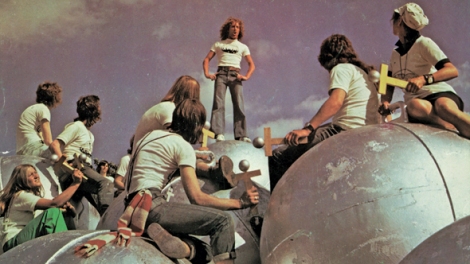 Ambitious in scale and concept, Tommy‘s elaborate sets and epic numbers keep growing as the film constantly outweirds itself. Just when you think you’ve gone completely insane, Elton John shows up and sings Pinball Wizard in 4-foot-high Doc Martins, or Eric Clapton as the head of a cult that worships Marilyn Monroe (and presumably Enoch Powell). 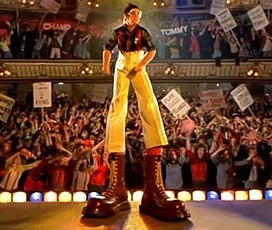 The effect is a giddying, trippy sensation that manages to enthral and repulse at the same time, thanks to The Who’s circus-like rock and Russell’s cynical direction. His eye for the grotesque and satirical make for a deliciously queasy experience, kind of like Life of Brian as told by John Waters. 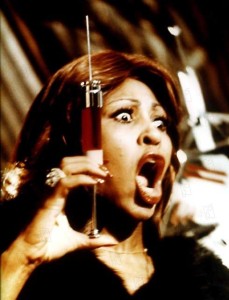 Pop culture worship is but one theme in Tommy‘s miasma, skewering ’60s and ’70s culture, creepy British pastimes and religious dogma, all of which are ritually smashed up by everyone from Hells Angels (probably an Altamont reference) to predatory uncles (Keith Moon).

This all makes for an intriguing and surreal experience, bursting with wild ideas, eccentric performances (including Tina Turner, Ann-Margret and Oliver Reed) and great songs. The only one missing is Pac-Man Fever.