They put it on wax and now they’re puttin’ it on paper: the Beastie Boys bring their book tour to London for a night of reading, reminiscing and the finest tribute to the dearly departed Adam Yauch since KRS-One accidentally killed the wrong Beastie Boy in song.

Adam Horovitz and Michael Diamond hit the Kentish Town Forum last night to entertain some drunk Beasties fans; an unusual environment for a book event, but this is no usual book event. Rather than a straight Q&A or reading session, Ad-Rock and Mike D perform in the band’s goofy style, featuring skits, videos and costumes. They’ve always loved dressing up, so this goes to prove why they scored a perfect 10 in “Sticking to Themes” (and the lowest scores elsewhere) on Kool Moe Dee’s infamous rap report card. 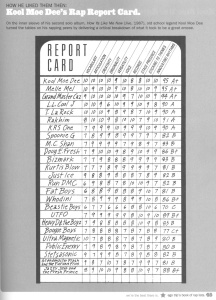 This is ironic considering the Beastie Boys’ story is one of evolution, growing from trouble-making, beer-spraying punks fighting for the right to party, into the group who said: “I want to say a little something that’s long overdue / the disrespect to women has got to be through / to all the mothers and the sisters and the wives and friends / I want to offer my love and respect to the end.” Mind you, in the same song they said: “I keep my underwear up with a piece of elastic / I use a bullshit mic that’s made out of plastic” so who knows what to think.

Ad-Rock (now resembling a cross between Jon Stewart and John Robins) expresses genuine regret over the band firing their original drummer Kate Schellenbach for not fitting their drunkest-guy-at-the-party image, becoming the kind of arsehole rockstars they’d originally set out to mock. So they cut their ties with Def Jam and Rick Rubin and went on to produce their best music on their own terms, demonstrated on the night by Mix Master Mike behind the turntables. 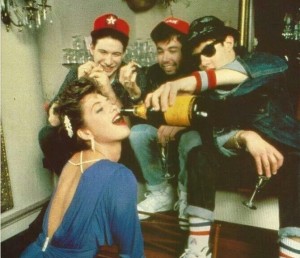 Finally Ad-Rock reads an extract about the Beastie Boys’ last gig and gets choked up, inviting an audience member to take over; a moving tribute to the late MCA whose drive, humour and spirituality (he was a leading voice in the Tibetan independence movement) are deeply missed.

Along the way we get photos by their friend Spike Jonze, stories about opening for Madonna and going to Dolly Parton’s birthday party, and clips of Mike D harassing Don Cornelius on Soul Train and Ad-Rock in a movie called Lost Angels (which I vow to review some day). It’s a giddily shambolic few hours of the boys dropping names, beats and cues like Galileo dropped the orange.