Welcome to a festive edition of the feature where we finally get round to a classic that’s passed us by, like the Marcus Brigstocke programme I’ve Never Seen Star Wars except we don’t go on to advertise a company that sells all your data. 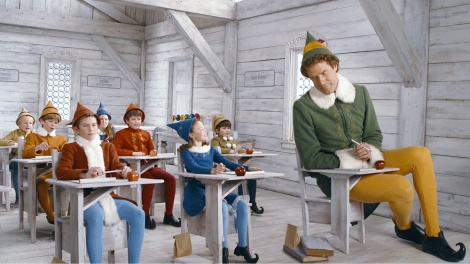 I’m not sure why I hadn’t seen 2003 comedy Elf before. It stars Will Ferrell and Zooey Deschanel (oh, mystery solved) and starts with Santa accidentally (supposedly…) abducting a baby in a scene that bears a strange resemblance to Takashi Miike’s Audition. Buddy (Ferrell) is then raised by the elves until he learns that he’s human and travels to New York to meet his biological father (James Caan). And if anyone can make a Will Ferrell movie watchable, James Caan.

The ensuing fish-out-of-water comedy is deftly handled by Jon Favreau, the consistency of the gags compensating for the lack of warmth in Ferrell’s annoying performance. That said his overgrown-kid shtick makes sense here as that’s literally the role, and the film fits neatly into place around him like a solidly constructed toy. There are more than enough lively, funny moments, including a scene involving spaghetti with maple syrup that has inspired a real restaurant to serve such a dish.

All of which makes Elf warm and fuzzy like a spoiled cup of coffee, and Buddy the best department store elf since David Sedaris. It manages to be Christmassy without being saccharine, thanks to a canny sense of humour and Caan as the story’s Scrooge surrogate. Meanwhile Deschanel’s character is presumably some sort of Elf fetishist or borderline paedophile, but I guess there has to be a love interest (there really doesn’t). At least they duet nicely on Baby It’s Cold Outside, although for some reason they miss the last verse…