America’s most creepy and kooky, mysterious and spooky, chunky yet funky (or is that Latrice Royale) family hit the big screen in 1991, finding themselves the victim of a con involving an imposter Uncle Fester (Christopher Lloyd as Ross Kemp).

This legal plot feels a little over-involved for a comedy based on single-panel cartoons, or the gag-filled sitcom version from the 1960s. Like the catastrophic Garfield movies (but categorically superior) big adventures don’t feel very Addams Family, especially when the story starts to crowd out the jokes, which are sprinkled lightly across the film and often lifted directly and agreeably from Charles Addams’ original cartoons (including the one below). 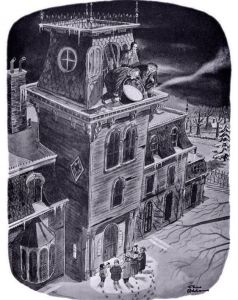 The casting is also welcome but again, less likeable than the sitcom; Anjelica Huston’s Morticia is strong if missing the Kate Bush charm of Carolyn Jones’ TV version (apparently Cher wanted the role which would also have been amazing), while Raúl Juliá’s Gomez has a different accent and lacks John Astin’s warm grin. Also look out for a young Christina Ricci as Wednesday Addams and Carel Struycken (the Giant in Twin Peaks and Lwaxana Troi’s valet in TNG) as Lurch.

A key element of the series that is successfully carried over is the passion between Gomez and Morticia; a married couple still demonstrably hot for each other (especially considering they’ve got 2 kids), which hadn’t really been seen on TV in the ’60s. Even today’s sitcom couples tend towards the notion that (as Carol Channing rasped and Marilyn whispered) men grow cold as girls grow old. Mind you, the Addams Family would probably view those as positives anyway.

That’s the other great thing about them: a joyfully upside-down outlook that’s long appealed to an outsider sensibility, and always played without judgement; the Addams Family are happy in their macabre lifestyle. This is brought to life by committed production design and direction by Men in Black‘s Barry Sonnenfeld (although going $5m over budget forced Orion to sell the picture to Paramount), with the Thing effects deserving a hand for still looking good.

Despite suffering under too much plot (why don’t they test whether or not it’s the real Uncle Fester simply by putting a lightbulb in his mouth?) it understands Charles Addams’ big black heart, making The Addams Family movie a worthy heir. 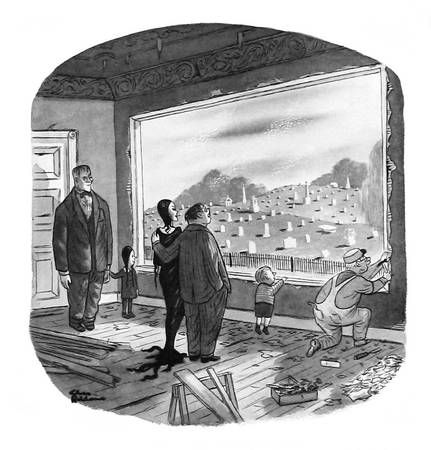