All I knew of ’80s band Bros was that drummer Luke Goss had been in Blade II and Hellboy II, and that this film was apparently the most Brentian documentary since The Armstrongs. 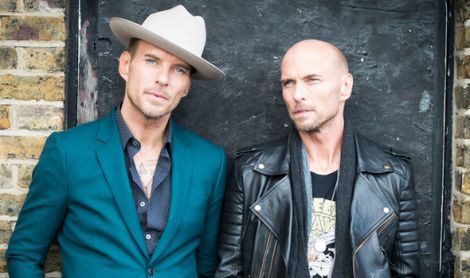 Following the Goss twins as they prepare for their 2017 reunion concert at the O2, After the Screaming Stops is packed with Spinal Tap-like quotes and incidents. “One of my songs is called We’re All Kings,” muses lead singer Matt from his piano stool, “which is about a man sweeping the road. He’s one of my kings because I’m thankful I don’t have to sweep the road.”

But where David Brent: Life on the Road felt forced, there’s an authenticity here precipitated by Matt and Luke’s honesty. Constantly on the verge of tears, the boys speak as though in therapy about their fame-damaged relationship; it was resentment and ego that caused the band’s split in the early ’90s.

Matt was then given a Vegas residency by the creator of The Pussycat Dolls while Luke headed to LA to be an actor, hence his ability to keep a straight face while Matt says things like: “He was a rectangle and I was a rectangle and we made a square, which therefore is a fortress.” Ron Perlman shows up to tell us that “Guillermo Del Toro adores him,” but the only other contributions come from the Goss brothers themselves – no mention is made of the band’s third member, bassist Craig Logan.

Now seemingly incapable of rehearsing or even speaking without arguing, Luke and Matt are walking adverts against young stardom; they were only about 19 at the time of their smash hit When Will I Be Famous?, a question soon answered by hordes of screaming, fainting teenage fans. But to quote The Pussycat Dolls: “Be careful what you wish for.”

The rockumentary genre is essentially a history of talented people being chewed up and spat out by the music industry, although After the Screaming Stops is more focused on family than music – which is no bad thing when you’re dealing with Bros.

Between pointing at a painting he’d had done of his dog holding a pint of beer and lamenting that you can’t even play conkers in this country anymore, Matt thanks Bros fans for facilitating a family reunion nearly 30 years in the making; one of many touching moments in a film so full of pathos that when the boys finally perform When Will I Be Famous? at the O2, it really seems to be asking “who’d want to be?”