Shoe shop owner Henry Hobson (Charles Laughton) is intent on marrying off his two younger daughters (Daphne Anderson and Prunella Scales) while keeping his eldest, Maggie (Brenda de Banzie), to cook and run the shop while he’s in the pub. But Maggie has other ideas, setting up her own business with talented but simple boot maker Willy (John Mills) in this film about a load of old cobblers.

Directed by David Lean, and released just three years before the first of his great epics, The Bridge on the River Kwai, Hobson’s Choice is laced with the creativity and flair which allowed him to push the boundaries of film later in his career. This is particularly true in scenes where Hobson battles his alcoholism, seeing double and encountering bizarre hallucinations. 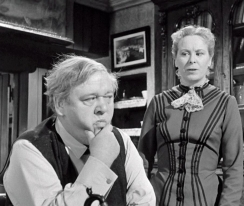 But set in Victorian Salford and dealing with the lives of humble working people it’s more grounded than some of his later work. The initial set-up is close to Fiddler on the Roof, as a man seeks to marry off his daughters, but where Tevier does this with the best of intentions and confronts his own prejudices, Hobson is an altogether more selfish man, and the only fiddle that gets played is him.

Maggie is a great character. Smart and independent, competent and confident, she’s hard nosed and well rounded, even if she’s not afraid of the odd accidental Slocombe (“If you want your Albert and you want your Freddy you’ll be respectful to my Willy”). Mills is also good as the lowly cobbler. Slightly reminiscent of Barry Chuckle, he undergoes a kind of gender-swapped My Fair Lady transformation. But where that film has a condescending attitude to class, Hobson’s Choice empowers its disadvantaged main characters, and adds both heart and sole to boot.

One response to “Hobson’s Choice”