Shaft cleverly avoids the ludicrous titles of other long-running franchises by just calling every installment Shaft. But as this latest Shaft features the original John Shaft (Richard Roundtree), his nephew, John Shaft (Samuel L. Jackson) from 2000’s Shaft and his estranged son John ‘JJ’ Shaft (Jessie Usher) they could have reasonably called it Shafts. They even go in an elevator together: three Shafts in one.

Unlike 2000’s Jackson-led offering, which essentially recast the role with a fleeting reference to Shaft I being Shaft II’s uncle (the seven year age gap was hardly a torch pass from one generation to the next), this is a proper handover movie, with Shaft III, an FBI data analyst, seeking his father’s help after his friend (Avan Jogia) dies in mysterious circumstances. I hope they keep adding a Shaft with each installment, and Shaft 2049 will have a dozen of them like Shaft: Into the Spider-Verse.

It follows a buddy cop formula as the college-educated son and streetwise father learn from each other to solve the case. This allows for far more character development than 2000’s Shaft, where two-dimensional Shaft II attacked the case by punching people in the face and yelling at them. This time Jackson’s violent psychopath has brief moments of contemplation, and even apologises at one point. And as he comes to terms with his paternal responsibilities he has to decide whether to share or to Shaft. 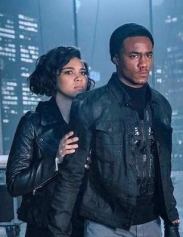 Yet it keeps 2000’s glorification of the lawless investigator, like Stallone’s pro-police brutality films of the 80s and 90s. Shaft II breaks suspects’ fingers, shoots people, doesn’t pay taxes, doesn’t have a driving license, compulsively jaywalks and probably has a whole pile of overdue library books. If Roundtree’s Shaft was the black James Bond, Jackson’s is the black Cobra.

He’s also a self-appointed defender of toxic masculinity, as the 70-year-old barely goes a sentence without mentioning pussy and flings homophobic abuse at his son for anything he thinks makes him less manly, like wearing a shirt. The original Shaft is a black private dick who’s a sex machine to all the chicks. Shaft II is just a dick.

But it’s still fun to get the full Hamuel L. Jackson as Shaft II and Usher is a likable lead, with the potential to go solo as a more modern take on the character in future films. It’s also good to see Roundtree return to the role he first played on the big screen almost five decades ago. Undeniably more well-rounded and self-aware than its immediate predecessor, Shaft successfully freshens up the franchise and shows Shaft shouldn’t be shelved yet.