The BBC broadcast an exposé of antisemitism in the Labour Party last week, much to the chagrin of party spokesman Owen Jones who helpfully criticised the camerawork, likening it to a Hammer Horror film. Which is ridiculous. It’s much more like H. P. Lovecraft. Or Dead Snow. 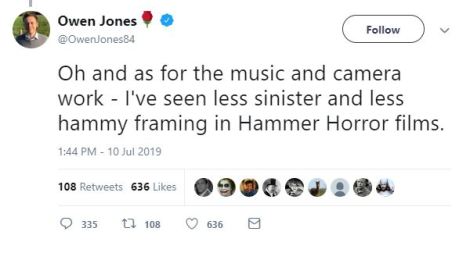 The story of a group of students getting attacked by Nazi zombies (just to be clear I am talking about Dead Snow now), this 2009 Norwegian zom-com is directed by Hansel & Gretel: Witch Hunters‘ Tommy Wirkola. Where that movie was a confused mess, Dead Snow nails the fun tone required to pull off such a tastelessly low-budget high-concept.

A genre-savvy mash-up of Nazi nasties and zombie cinema, Dead Snow‘s none too subtle message about the rise of Norwegian neo-Nazism (2 years before the Anders Breivik attack) makes it even more relevant now, whether you live in Europe, America or (if the Iron Sky documentary is to be believed) the Moon. Zombies and Nazis both turn people against each other, and as Wirkola shows, that can prove fatal.

But the focus is on Sam Raimi-inspired splatter over George A. Romero-style allegory, delivering the visceral thrills missing from The Dead Don’t Die, as an army of zombies (the schnell kind) pop up from the snow like malodorous daisies and start dismembering our heroes faster than Jewish people dismembering from Labour.

Wirkola sprays endless amounts of gore and gags (“They wouldn’t recruit someone who was half-Jewish would they?!”), references to pictures like Braindead and April Fool’s Day, and a brilliant gravity-based shot of someone trapped under the snow.

As with other Scandinavian genre flicks like Trollhunter and Rare Exports, the fantastical horror comes with a wink to camera, and Wirkola’s lightness of touch keeps Dead Snow the right kind of offensive. To put it in Owen Jones’ terms, I’ve seen more antisemitism in an episode of Panorama.