Jim Carrey plays a hotshot lawyer who’s always disappointing his young son and estranged wife (Justin Cooper and Maura Tierney) by failing to show up to things. But when he loses the ability to lie for a day his web of fictitious excuses starts to unravel. 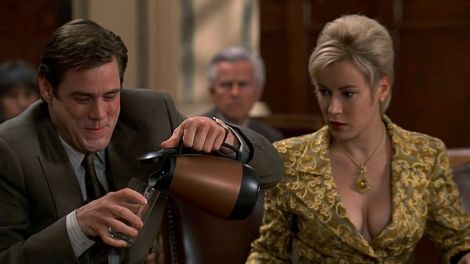 The set-up is essentially the reverse of The Invention of Lying, in which only one character is able to lie. But where that film flounders around, unable to take advantage of its setup, Liar Liar benefits from a well-structured story and a decent character arc. Like in The Invention of Lying, the inability to lie often extends to an inability to withhold the truth where required by the script, in fact I was half expecting him to blurt out that his son has the worst haircut on the planet.

This is peak Carrey, and whether that’s a good or bad thing will depend on your taste. But whatever you think of his exhausting comic style, he does it well, including a very good impression of a man having a nervous breakdown. He also manages to make his dirtbag lawyer an appealing lead character in spit of his nose-extending behaviour, a difficult balance to strike.

This is especially true in the film’s courtroom scenes (which are an appropriate use of a courtroom in a comedy) as he desperately tries to hold his flimsy case together without resorting to his pre-prepared lies. But although the story looks set to criticise a profession which can reward stretching of the truth, this is undermined by its ultimate conclusion.

The story, while straightforward and totally unsurprising, is well handled, with a clear moral message. It’s well directed with impressive stunt work to complement Carrey’s manic behaviour and large-scale action set pieces which bring a surprising level of visual spectacle, adding up to make something fibulous.

One response to “Liar Liar”