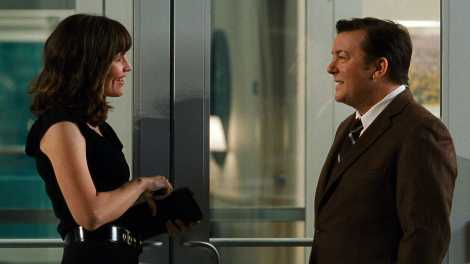 As a romcom it’s a total flop, as all characters other than Gervais’s Mark are rendered totally unrelatable by their robotically brutal honesty. With the exception of Dawn and Tim, Gervais’s onscreen romances are cloying and heavy handed at the best of times, and this certainly isn’t the best of times for him.

He gives the exact same performance he’s given in everything from Extras onwards – himself, minus the cackling laughter and silliness. In The Invention of Lying he’s particularly wooden, finally killing off the notion that he might have a career as a Hollywood leading man. 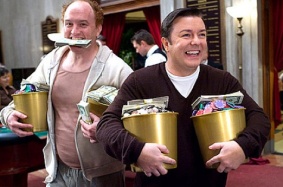 The best scene is one which he shares with his dying mother, where he displays some believable emotion, and also inadvertently invents religion, one of the film’s central themes. In this world everyone assumes nothing happens after you die, so to comfort his mother he tells her she’s headed to an eternity of bliss. He’s overheard and forced to elaborate on his lies, which directly mirror our Judeo-Christian religions.

It’s a bold move for which Gervais deserves credit, particularly given the presumption of Christianity many films have. However, he relishes the opportunity to satirise religion so much that rather than simply fabricate ideas which reflect those of our religions implicitly, Mark writes commandments on tablets (well, pizza boxes) which he delivers to a crowd in his doorway, and invents an ‘invisible man in the sky’ as well as heaven and hell.

Is he saying that if religion disappeared overnight and was re-invented it would take the exact same form it does now? Or does he think the audience wouldn’t see the obvious parallels without explicit references?

The premise of the film is better as a thought experiment than as an engaging romcom, yet this is just one example of where it’s not as well thought through as it could be.  No consideration is given to how a world without untruth may be different from ours, with the sole exception of films, which are just lectures on actual history. Metaphor, perhaps the key form of non-literalism, exists. Perhaps it was too much effort to excise it from the script. 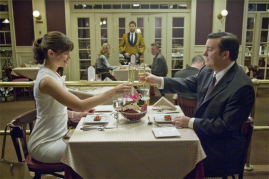 Gervais calls in favours from his pals including Philip Seymour Hoffman, Tina Fey, Edward Norton and Louis CK, as well as jarring cameos from Stephen Merchant and Shaun Williamson. Yet in spite of all the comic talent attached to this, it’s only sporadically amusing. And while it may be an interesting premise, it results in too many plot holes to work narratively.

It would have been better if the romantic element had been abandoned in favour of a more thorough exploring of the idea – perhaps Mark could have had an accomplice and they could forge rival versions of the truth and opposing cults; he could seize power and struggle with the implications, or he could cause a catastrophe which it’s then on him to solve. Maybe he could learn a lesson about the importance of telling the truth.

But it’s only as good as the imaginations of its writers. So if, when presented with the idea of being able to make everyone believe everything you say, all you can think to do is use it to get the girl of your dreams, this is the film you end up with.

2 responses to “The Invention of Lying”