The release of the Terrance and Phillip movie leads to a war with Canada after Kyle’s mum accuses the nation of corrupting America’s children. 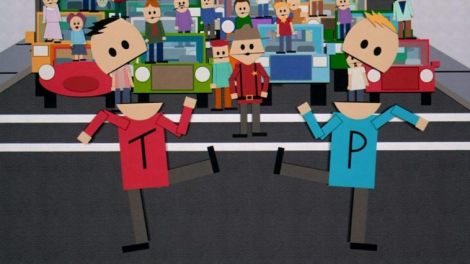 In 1999 South Park was only three seasons into its run and already at the height of its powers, using its child’s eye view to explore adult themes no other cartoon would touch with an animated barge pole. Of course The Simpsons already did it (to quote a later episode of South Park) in 1990’s ‘Itchy & Scratchy & Marge’ where Marge campaigns against cartoon violence, but the South Park movie goes further in every sense.

A glorious combination of musical and self-parody (Terrence and Phillip were born out of the criticism that South Park was crudely animated and reliant on fart jokes), the movie pulls no punches and boasts brilliant songs; ‘Blame Canada’ was nominated for an Oscar (Trey Parker and Matt Stone attended the ceremony on LSD) but was beaten by Phil Collins’ Tarzan soundtrack, in a decision more offensive than any of the film’s content.

As its innuendo-laden name suggests, Bigger, Longer & Uncut is a feature-length episode of the show; essentially three of them stitched together, giving Matt and Trey room to follow through (sorry) on every outrageous idea. These range from Saddam Hussein sleeping with Satan to Cartman being subjected to electric shock aversion therapy, the dark subject matter leavened by the film’s clear purpose, laugh-out-loud humour and jaunty songs.

20 years later one can’t help but miss this classic South Park animation style, the crudely perfect design lost in the smoother look of recent series (along with Cartman’s raspy voice, to say nothing of the overall consistency). We also get to see Kenny speak, along with guest voice spots for Brent Spiner and Eric Idle. Bigger, Longer & Uncut is a snappy and satisfying satire, as ambitious as it is audacious and a creative peak for Rockies-based filmmaking. Sorry Cliffhanger.