This is the story of high school senior Luce (Kelvin Harrison Jr.) and his history and government teacher Harriet Wilson (Octavia Spencer) as he prepares to go to college. But The History Boys this is not, as it’s suspicion rather than lust which causes problems after Luce writes a provocative essay. Has the model student got a secret dark side, or does his teacher harbour an unfounded grudge?

Its theatrical origins are apparent as the psychological sparring between Luce and Harriet has intellectual clout to match its high stakes drama. It occasionally plays loose with reality, as various characters unfairly reach conclusions based on minimal evidence, but JC Lee and Julius Onah’s script is so involving that it easily brushes aside any niggling criticisms. 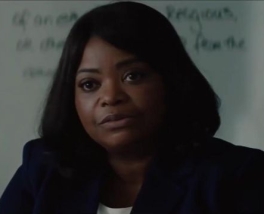 Like a crime thriller it draws you in, managing to maintain ambiguity for a remarkably long time while never feeling like obfuscation, feeding us a constant stream of new information. It has the intrigue of a complex whodunnit, but there’s no murder, just enthralling drama, shrouded in mystery.

Luce was born in a war zone but adopted and raised by well-off white parents (Naomi Watts and Tim Roth) who stand in their kitchen drinking wine. He’s seen as a threat because of his troubled childhood, but its the unrealistic demands placed on a high-achieving black student which are the real cause of his problems. And while the layers of moral ambiguity match any great thriller, it’s more than this, making a statement on racism in the US as well as themes of teenage rebellion, stereotyping and feelings of distrust and danger in American schools.

Harrison plays Luce’s nuances excellently, matched by the raw emotion of Watts and a healthy dose of Octavia Spencer in a powerhouse performance. And it owes not a small amount of its intensity to Geoff Barrow and Ben Salisbury’s thumping minimalist soundtrack and Onah’s uncompromising direction. As a result it draws you in to be absolutely engrossing, with audible gasps from the audience at various points. And for all the column inches wasted on the vacuous Joker, it’s Luce which deserves to be the autumn’s most talked-about film.

One response to “Luce”