On a Colombian mountaintop a group of teenage soldiers are left in charge of Shakira the cow and an American prisoner (Julianne Nicholson). But before you can say Lord of the Flies, Shakira is accidentally killed, leaving the group in big trouble with the big boss. 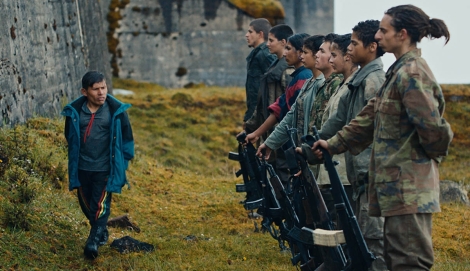 This film is in equal parts disturbing and perplexing. Child soldiers engage in acts of brutality and wield machine guns, while holding a woman in confinement. But they’re not hardened psychopaths, nor do they seem radically different from ordinary children/teens, with many moments of vulnerability and empathy, and even a rave. Message: children will burst forth in violence as soon as they’re left without adult supervision.

Yet it requires us not to take it literally. We’re never told what or who they’re fighting for or how they were recruited, and little about their unfortunate prisoner. Then mid-way through it switches from its Scottish Highlands-esque mountaintop to tropical rainforest with no connecting tissue. This isn’t a criticism, just an example of its puzzling story, focused on visuals, character and atmosphere rather than plot detail.

But wherever or whenever it’s meant to be, it’s exceptionally well made (as you’d expect from a Colombian film which has made it all the way to Cineworld) with remarkable cinematography of mountains rolling in mist and rivers weaving through dense forests, with establishing shots that wouldn’t look out of place in Koyaanisqatsi. Apparently the locations were so difficult to access they’d never been filmed before and this attention to the visuals really pays off.

It’s tense and engrossing throughout, in part thanks to brilliant sound design, and stands as a testament to writer/director Alejandro Landes. There are excellent performances from everyone, including Deiby Reuda as Smurf, the youngest of the group, Karen Quintero as Lady and Sofia Buenaventura as Rambo, making a remarkably convincing boy. They all bring sensitivity and depth to their parts which make this a compelling and involving watch which is hard to mountain top.

One response to “Monos”