Navy Admiral Matt Sherman (Cary Grant) visits his old submarine, the USS Sea Tiger, as it’s about to be decommissioned. He reminisces about its glory days from his crew’s restoration of the dilapidated ship to its missions in World War Two. Along the way they pick up charming supply officer Holden (Tony Curtis) and a group of ladies. The scandal! 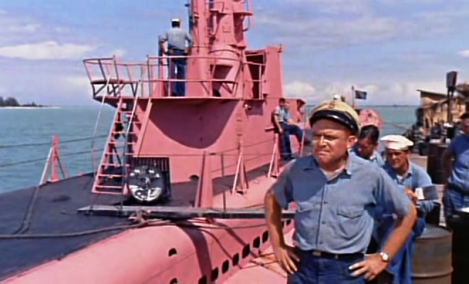 This is an odd mix of screwball comedy and war film, but not an altogether displeasing one. Tonally it’s similar to other Cary Grant comedies but with the setting and visuals of The Enemy Below.

Elements feel dated: the supposed comedy which derives from having a group of attractive young women (all military officers) on board doesn’t hit its mark, and feels more like a propaganda piece against allowing women to serve in the military. But in other areas it’s more humorous, including the crew’s chaotic, shoestring refurbishment of the ship, and Grant’s no-nonsense captain playing off Curtis’s smooth talking shyster.

The often farcical tale culminates in an absurd but well-done stand off between the US and Japanese navies, with the submarine, which has accidentally been painted pink, in between. The result is amusing farce and a decent war movie to Unterseeboot.