In a courtroom, Nick Arden (Cary Grant) is having his first wife declared dead after she went missing in a boating accident so he can marry Bianca (Gail Patrick). But when the happy couple arrive at the hotel for their honeymoon, who should be there but wife no. 1 Ellen (Irene Dunne), looking remarkably well for someone who’s spent seven years on a desert island. 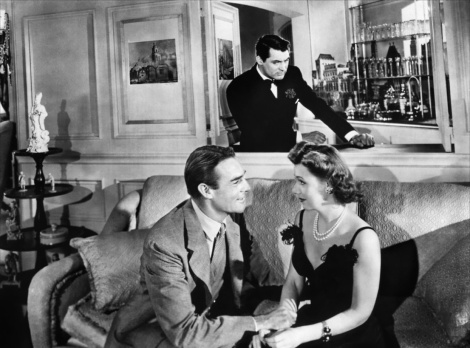 The ensuing farce sees Nick try and fail to tell the emotionally fragile Bianca what’s happened, Ellen reintroduce herself to her children (Scotty Beckett and Mary Lou Harrington) who were only babies when she left and Nick having to choose between the women while avoiding bigamy.

It’s still genuinely funny, and not even in a ‘I can see how this would have been funny at the time’ sort of way. Particular highlights include a comedy answer to The Passionate Friends, with Nick having to rush between the women in two separate honeymoon suites, under judgemental eye of the hotel manager (Donald MacBride) and a sequence in which Ellen pretends to be Nick’s friend from the south.

Unfortunately the joke is too often on Bianca rather than Nick, who takes most of the blame for the situation, but Ellen has an impressive amount of characterisation for a female love interest in 1940, with wit and a playful but wicked sense of humour. Both Grant and Dunne give excellent performances which makes this film what it is, and is even helped by the two children, in particular precocious son Tim. So in spite of an ending that lingers longer than it needs to, it’s a consistently funny, entertaining and likable film about the importance of tackling problems head-on.

One response to “My Favorite Wife”