During the reign of Pope Benedict XVI (Anthony Hopkins), Cardinal Jorge Bergoglio (Jonathan Pryce) tenders his resignation, disillusioned with the way the church is going. Benedict summons him to Rome to find out more, and discovers an unlikely confidante in the man destined to succeed him as Pope Francis. 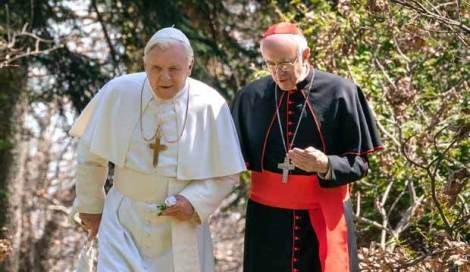 Hopkins is well suited to the part, with the sinister air that makes him plausible as the man who built his career on enabling child abuse. Pryce is equally infallible, and both look so much like their respective popes it’s hard to tell them from the real footage used at the end. The Vatican is seamlessly reconstructed, from a flawless interior of the Sistine Chapel, to the view from the balcony over a packed St Peter’s Square which makes you forget you’re watching a film.

The scenes between the two are highly compelling, in spite of their reserve as two senior clergymen, and sections which don’t feature the pair, mostly the over-long flashbacks to Bergoglio’s youth, are the poorer for it. Its cardinal sin is borderline hagiography for Francis, a reformist who nonetheless stands by many of the church’s highly conservative positions. 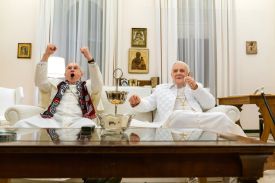 The unpopular, dogmatic traditionalist, dismissed by many as a Nazi, is contrasted with the relative radical who leads by example. In fact when we were in Rome earlier this year, their comparative popularity was clear even from the tourist stands, with abundant merchandise for Francis and his predecessor-but-one John Paul II, but not so much as a fridge magnet of the still-living Pope Emeritus.

The film is obviously highly speculative – clearly no-one knows the private conversations between the pair – but it’s interesting speculation, casting more light on Benedict’s decision to resign without precedent for seven centuries. It does, however, stop short of showing Benedict’s response to his successor overturning his legacy, which I expected to be a key part of the film, instead implying satisfaction on the part of Benedict, with the reforming choices of his successor a product of his own wisdom.

So by the time the white smoke appears from the chimney the verdict is an engaging and occasionally humourous drama that is well worth holy seeing, even if its insights should be taken with a pinch of salt.