Following two films that were both critical and commercial successes, an unfathomable $15m drop in budget (that’s over 25%) reveals itself in every single scene, whether that’s virtually erasing Lois Lane (Margot Kidder) from the film (you may remember Superman was prepared to give up his powers for her in Superman II), describing Superman’s incredible feats rather than showing them and even being too cheap to use its legendary John Williams theme music more than twice. It runs long scenes without cutting at all and has amateurish sound design, including a fountain in the villains’ lair which intrudes on all dialogue uttered in its presence. 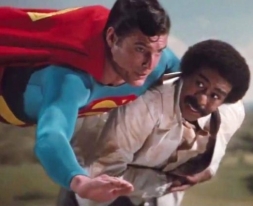 The cyber crime plot is ahead of its time, but the screen writers also clearly have no idea what cyber crime might actually involve, nor that it may not be the problem Superman is best equipped to solve. It further dials up the comedy, with lengthy slapstick sequences which aren’t funny, but does result in a more enjoyable film than certain long drudges. There are a couple of good jokes and a well-executed Superman v Clarke fight sequence which should have been the climax of the film. And bizarro Superman straightening the Leaning Tower of Pisa is exactly what we need (even if it’s another poorly executed effect).

This is quintessential comic book campery – of the type needed to make Superman’s more absurd characteristics work – which goes even further than its predecessors on the comedy front. The result is a hilariously bad dollar store DC movie which has just enough cheesy charm to be an amusing historical relic.