Billing itself as the “gladiator match of the century”, Batman (Ben Affleck) takes on Superman (Henry Cavill) to see if either of them can convince fans to part with their cash. Who will win? Not the audience, that’s for sure.

All good sequels take the essence of their predecessor and build on it, and Batman v Superman is no different. While Man of Steel was over-hyped, and failed because instead of making an emotional connection with the audience it had explosions, Batman v Superman takes the hype to stratospheric levels, multiplies the explosions by ten and has less emotional resonance than re-arranging your stationery draw.

There’s a fleeting suggestion that Zack Snyder might have learnt his lesson. The large scale destruction that formed the climax of the last film was widely ridiculed by audiences, and this is used as motivation for Batman to take on the spandex-clad Kriptonian. But since Snyder doesn’t know how to make an action scene without huge explosions that destroy everything in the immediate vicinity, any apparent lessons learnt quickly fly out in the window in a blue and red blur.

But the writing was on the wall from the start. With the Marvel Cinematic Universe now long-established and highly profitable, DC is desperate to get its own crossover films off the ground. But with the failure of Ryan Reynolds’s Green Lantern killing off a Justice League movie for the umpteenth time, this was the compromise.

With the recent and much-loved Christopher Nolan Batman films, the hope is that this will move Superman into the same league. But instead it drags down Batman, completely failing to establish the Batfleck as a new or interesting character. Another re-enactment of the Wayne parents’ death just won’t cut it I’m afraid.

Once again Snyder doesn’t understand that a grey, washed out colour palette and heavy violence don’t make people invest in a film. You need characters, motivation and a universe people care about. But it’s not just that the characters and plot are weak: even as a big, loud, hollow action film it’s slow and boring. It takes about an hour for anything remotely interesting to happen, and the action is just generic CGI mayhem.

Jeremy Irons is good as Alfred, but left ignored in the Batcave. Meanwhile Jesse Eisenberg gives the most engaging performance in the film, remembering he’s in a comic book movie and having fun with it. This is in opposition to the stony faced Affleck and Cavill who look as bored as their audience. Why Affleck would commit himself to this project after establishing himself as a great director with Argo is baffling. Cavill on the other hand is just lucky to be working.

The fly on the turd is the creakingly forced establishment of the Justice League, with Wonder Woman (Gal Gadot) standing around for some reason, and allusions being made to its other key members. But if the audience reaction is anything like that of the critics, the JLA looks likely to be kicked into the long grass once again. If you can’t make Batman and Superman work, what hope is there for poor Aquaman?

The films of the MCU are formulaic, but they’re also breezy and fun, with knowing winks and enjoyable humour. Batman v Superman sets itself out as the mature alternative, but with no ideas beyond its title it implodes into nothing.

So who wins in the end? The truth is that by the time the credits role the only person who will be smiling is Joel Schumacher, who will be glad he no longer directed the worst Batman movie ever made. 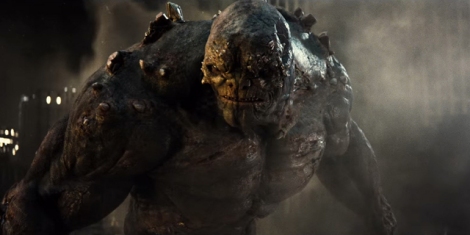 “Hi! I’m giant CGI monster #698. You might remember me from such films as everything.”