10,000 years before 10,000 BC, Alpha deals not just with early humans but early canines, as we discover how dogs became to man what diamonds are to girls.

Like 10,000 BC it opens with a hunt, but of buffalo rather than mammoths. When a young hunter (Kodi Smit-McPhee) takes a little tumble off the cliff, Aragorn style, he’s left struggling to survive. On his journey back to his tribe he encounters a pack of wolves, finding an unlikely companion when he nurses one back to health. 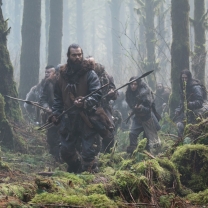 A while back I had the idea of making a serious film set in hunter gatherer times, but so far in this series my hopes of finding one have been thwarted. Then came Alpha, a genuinely interesting look at how our ancestors survived in the last ice age. It even features a very plausible fake language, created by an actual linguist, adding to the sense of realism.

Like 10,000 BC it’s very serious in tone, but this is more fitting since much of the film is a person surviving by themselves, rather than laying siege to Egyptian burial sites. Another similarity is bookend narration from a well-known star, but where 10,000 BC went for an audibly aged Omar Sharif, Alpha sticks to the cliché of Morgan Freeman.

It’s told with beautiful cinematography and film-making panache from director Albert Hughes. Unfortunately it’s over-reliant on CGI which stops much of the film from looking natural, which is a shame because it’s the only film we’ve seen in this series with any kind of commitment to authenticity. But it certainly leads the pack as a highly enjoyable, compelling and exciting tale of survival, and if you want to watch a prehistoric film of genuine quality it’s worth an Alpha-bet.

One response to “Screens of the Stone Age: Alpha”