If anyone in the future is reading this, we’re all currently stuck indoors due to a virus that’s closed the cinemas (a massive blow to Sonic the Hedgehog fans) and suspiciously coincides with the launch of Disney’s streaming service. So after alphabetising all the Quarantine movies (Quarantine, Quarantine 2: Terminal), it was time to fill in some glaring cinematic gaps. 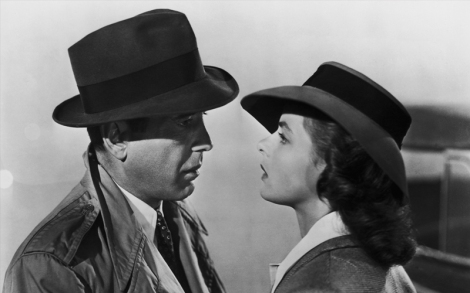 Essentially Porco Rosso without the pig, 1942’s Casablanca follows an American (Humphrey Bogart) running a nightclub in wartime Morocco, the last outpost for refugees trying to reach America via Europe. The opening scenes are proto-‘Allo ‘Allo! sketches about the comings and goings of various interesting characters of different nationalities, before Bogie’s old flame (Ingrid Bergman) walks in and reignites his antifascism passion.

Grumpy Bogart is excellent as the expat in the hat, and Bergman almost literally shines as the catalyst for his switch from expatriate to patriot. That the script was unfinished while shooting may go some way to explaining the beautiful transience of their performances, and unlike most films with production problems (those poor Sonic the Hedgehog fans) these could scarcely be less apparent.

Casablanca is one of those movies made up of moments so iconic and dialogue so often quoted that you’ve almost seen it even if you haven’t, a bit like Star Wars. This makes watching it even for the first time like seeing an old friend through a gentle fog. What’s surprising though is that it almost entirely takes place in one location, which empties over the course of the drama, and how it manages to be patriotic without being nationalistic.

This is a film about war set in a café, about America without ever going there. It considers the sacrifice of war, and like 2018’s Cold War views war first and foremost as a barrier to human relationships. Achingly romantic and compellingly constructed, the writing is as snappy as Sam’s (Dooley Wilson) tunes, resulting in a classic Hollywood romance that only gets more wistful As Time Goes By.