Studios scrambling to cash in on the latest craze has produced so many escape room-themed movies that working out which one you’re watching is a puzzle in itself.

2017 saw the release of at least two movies called Escape Room, so to clarify, this is the one produced by Escape Productions. I don’t know if that’s a company that actually runs escape games, but that would explain why this film is literally just some people doing an escape room. It follows a group of obnoxious rich white folks (the Asian character goes home before they get to the escape room) who decide to celebrate their friend’s birthday the traditional way: getting drunk and locking themselves in a room.

After handing over their phones (“All you can take with you are your wits,” unfortunately for them) the team starts squabbling over the game which, aside from the health and safety violations, has the production value of an average escape room. And that’s about it. Wealthy wankers tediously testing the strength of their lateral thinking and bladders. If I want to watch stupid people slowly solving puzzles I’ll watch Jungle Run.

This is all bookended by unrelated scenes where an unseen Jigsaw-style villain poses riddles to people from a completely different film. “If I drink I die, if I eat I’m fine,” turns out to be fire (you know, because fire eats) but this irrelevant wraparound is clearly an afterthought, resulting in a puzzle movie without a single twist. A real-life escape room collapsing and killing all its players would make a better advert for these things. 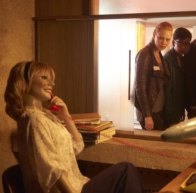 I never thought I’d be pleased to see the Sony logo but after that, this higher-budget ($9 million) offering from 2019 feels comparatively Kubrickian. This time we get some actual actors (as opposed to escape room employees) playing a game with some stakes, production values and a “twist”, trite as it turns out to be. The movie takes the relatively radical storytelling move of making at least a few of the characters sympathetic, poor or black. Unlike its 2017 namesake, this one is almost a film.

Ultimately it’s still people solving puzzles and therefore an unbelievably boring viewing experience, but at least we get some flashbacks and elaborate set pieces you wouldn’t find in a real escape room. It’s essentially a special effects movie, moving through levels of CGI puzzles like a kind of Dimception. There’s no suspense or gore, nor is it funny enough to succeed as a Final Destination-type escapist parody.

In essence the escape room genre predates the actual trend, having started with Willy Wonka and ended with Saw. But with Escape Room 2 due out next year there is truly no escape. What’s baffling is that neither of these films are really horror movies, which seems the obvious route when exploiting the concept of escape games. Maybe one of the other films gets that right. If only it was a numbers game.