The Cleek clan are back in this sequel to 2011’s The Woman, written and directed by the Woman herself, Pollyanna McIntosh.

While technically the third part of a trilogy, like its predecessor Darlin’ works as a standalone movie. It’s a joy to see the series continued by McIntosh, particularly as she had to spend most of the previous instalment chained up in a shed, and its clear from her committed physical performance and politically charged sequel that the character has real meaning for her.

The 2019 film follows the feral Woman to the city where she looks for her adopted daughter Darlin’ (Lauryn Canny), who has been taken in by a Catholic boarding school called St. Philomena’s, presumably named after the Judi Dench movie. An abusive bishop (Mad Men‘s Bryan Batt) makes it his mission to civilise Darlin’ just as the previous picture’s patriarch attempted with the Woman, while publicising the feral child’s transformation for his own fame and fortune. 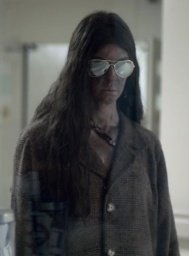 We track the two women in tandem: the girl and her kind classmates and nuns under the thumb of an exploitative institution; and the Woman who befriends a group of homeless prostitutes, free from societal oppression by completely removing themselves from it. Where Lucky McKee’s The Woman was unremittingly brutal, McIntosh’s sympathetic injection of sisterhood, coming-of-age themes and even comedy is reminiscent of the transition from The Terminator to Terminator 2, right down to the Woman’s Sarah Connor sunglasses.

This results in a sequel pitched somewhere between the cannibalistic coming-of-age drama of Raw and the anti-Catholic Church slasher Alice, Sweet Alice. In making this transition McIntosh loses much of The Woman‘s visceral horror and allegorical power; where that film attacked American society in general, this hones in on one specific aspect and ends up feeling more obvious and less shocking; the same reason Us is superior to Get Out.

Though less intense than its predecessor, Darlin’ is an accomplished directorial debut for McIntosh with a pair of striking performances at its core. Not only is it rare to see a horror flick with a story instead of a template, it’s refreshing to watch something so weird without it seeming muddled. Angry, feminist and lovingly dedicated to the series’ late creator Jack Ketchum, Darlin’ is as carin’ as it is darin’.