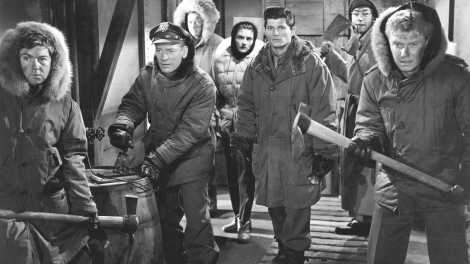 The Thing from Another World follows a team of US soldiers and scientists to the North Pole to discover a flying saucer and its pilot, an “intellectual carrot” that feeds on blood. With uncredited rewrites from Ben Hecht and ghost-directed by Howard Hawks, it’s fun (if jarring) to see Hawksian flirting in a sci-fi B picture; think The Quatermass Xperiment meets His Girl Friday. The sharp female character (Margaret Sheridan) even has her contributions taken seriously, a stark contrast from the damsel-in-distress of Creature from the Black Lagoon three years later. She’s still only a secretary though. Let’s not go mad.

As in the John Carpenter remake, the action moves from expansive Arctic landscapes to increasingly claustrophobic confines. Holed up in a freezing research station, the soldiers and scientists wittily argue the merits of destruction versus examination. The film comes down firmly in the former camp, portraying the head doctor (Robert Cornthwaite) as a dangerous obsessive willing to kill his comrades to preserve the rampaging specimen. This is a movie deeply rooted in Cold War paranoia, expressing fears of the Other, chemical warfare and the spread of ideology.

This Thing has the political subtext and dead dogs of the Carpenter version (without the full-blown visceral and psychological force) and wisely keeps the vegetable creature either off-screen or shrouded in darkness, producing a solid nugget of 24-carrot sci-fi.

The Thing from Another World is available for free on archive.org.