Okwe (Chiwetel Ejiofor) is a doctor by trade, but since illegally migrating to the UK he works as a cab driver and a hotel night security officer, living in fear of immigration police. He shares a tiny flat with a refugee called Senay (Audrey Tautou), who works as a cleaner at the same hotel, where the dark activities of the night soon come to involve them both. 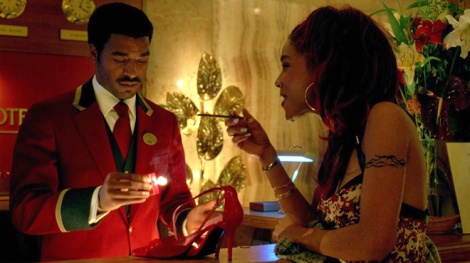 While a thriller,  Dirty Pretty Things plays close enough attention to its characters to qualify as a drama. It depicts the lives of the two immigrants in such an upfront and bleak way that its social message is as strong as any This Is England or City of God.

At the same time it never feels distasteful or like a melodramatic sob story, with one or two mildly amusing moments towards the start. Both central performances are superb, and it has a strong supporting cast including Benedict Wong as Okwe’s hospital worker friend Guo.

The issues surrounding immigration, as well as the plight of the worst off in society, have never felt more relevant. With the government’s recent ‘go home or face arrest’ advertising campaign, anti-immigration feeling is high, and films like this are important. Illegal immigrants are vilified by certain sections of the press, and this is reinforced by politicians who pander to sentiment that is dangerous and counter-productive.

Showing immigrants as desperate people fleeing unimaginable horrors to come to the UK and do jobs no-one else would do for little money is an essential look at the opposing view. The London of Dirty Pretty Things is not a place anyone would go to for an easy ride.

The life and death struggles people like Okwe and Senay face daily deserve to be drawn attention to. When a man asks Okwe why he hasn’t seen him before, he neatly explains: ‘we are the people you do not see. We are the ones who drive your cabs. We clean your rooms. And suck your cocks.’ Dirty Pretty Things will help you see.