In a summer full of identical superhero movies, it’s a relief to see 2010’s Kick-Ass followed up in its uniquely uncompromising style. Hit-Girl and Kick-Ass are back, but she’s starting high school and he’s got people trying to kill him. So regular teenage stuff. 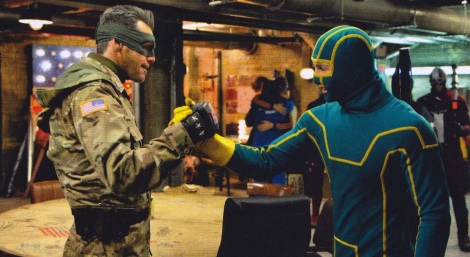 While the original Kick-Ass shocked audiences with its sporadic bursts of violence and swearing, the sequel risks the charge of overkill. In the first film it was the space between children cursing and microwave murders that gave them their punch, but when every character’s name contains a swear word it quickly stops being shocking. But it’s still great to see a superhero movie which isn’t just chasing the money and which does actually take risks. The violence is certainly strong (too strong for Jim Carrey) but it all has meaning. Unlike the explosive 5 hour finale of Man of Steel, where stuff blew up but it all felt curiously empty, every cracking skull and breaking limb actually hurts in Kick-Ass 2.

This is simply because the characters are so well-developed and well-played, particularly Hit-Girl. Chloë Grace Moretz steals this movie just as she did the first. She nails the sensitive side of the character just as she does the bad-ass foul-mouthed stuff, like a tiny Jennifer Carpenter from Dexter. Her performance here actually made me optimistic about her playing Carrie in this year’s remake, as Hit-Girl’s high school storyline has shades of Carrie about it. Obviously it’s still going to suck, the point is Chloë Moretz is excellent. Hit-Girl is an amazing character and her relationship with Aaron Taylor-Johnson’s Kick-Ass is sweet, and refreshingly it’s just him that the movie could be accused of objectifying. She’s one of Hollywood’s few interesting female characters; forget Wonder Woman, let’s have a Hit-Girl movie.

Surrounding them are a range of cool characters – Nicolas Cage has gone but there’s a host of new additions to the cast including Scrubs‘ Donald Faison, Britain’s Andy Nyman and of course Jim Carrey who’s on such good form that it’s a shame he’ll never ever watch it. As the author of the comics Mark Millar said in response to Carrey’s comments, the film is about the consequences of violence in real life. This comes through strongly in the movie, which seems firmly against violence and is interested in real people and friendships. Unlike the vacuous explosion-fest of Man of Steel. Sorry, I’ll let it go.

Writer/director Jeff Wadlow has taken over from Matthew Vaughn and has actually done something quite impressive with Kick-Ass 2; he’s ramped up the action and the language while focusing more on characters and morality. It’s a bold antidote to superhero movies and while not as darkly impressive as James Gunn’s Super (starring Kevin Bacon), Kick-Ass 2 is funny, frenetic and holds nothing back; it’s that rarest of things – a good sequel.