Set in 1984, before the invention of self-awareness, Footloose follows Ren (Kevin Bacon), a big city boy who moves to a small town where dancing is banned. I don’t like putting spoilers in reviews, so I’ll just give you a clue as to what happens: it doesn’t end with him realising rock and roll is evil and leaving the town forever.

The writers approach the plot with astounding sincerity, from Ren’s romance with the preacher’s daughter (also the most fickle girl in town) to said girl’s reconciliation with her reactionary father as he learns the error of his ways. It’s the least self-aware thing to come out of the 80s since Mr T’s motivational video Be Somebody or Be Somebody’s Fool.

There’s something of an innocent charm to the tedious inevitability of it all, but I couldn’t help but wish it would end more like Carrie. It’s like Carrie made for the Disney Channel. One can’t help but think that if this ultra religious town had banned pork, rather than music, like the Bible suggests they might not have had to contend with Bacon (ba-doom cha!).

In spite of how crap it is, if you’re prepared to overlook the silliness of it and accept it at face value, it’s quite well done. Bacon gives a great performance, as does Chris Penn, both showing their skills on the dancefloor. Sarah Jessica Parker even has a small role in it, but is hardly recognisable, having only been in her early forties at the time.

There’s also some great music which certainly made me want to dance, but I always want to dance so it’s not really a fair study. 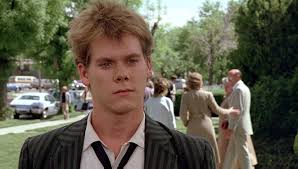 No. Fresh Bacon of Footloose looks so different from Footloose Bacon of that Kevin Bacon advert that it hardly matters. He’s actually pretty hot in this, kind of like a young David Bowie. That being said, seeing Bacon don his familiar rags for the advert thirty years later may ruin the Kevin Bacon advert for you a bit as by comparison he looks like bacon dressed as pig.

While Footloose may have been a guilty pleasure at the time, since then it has been rehashed and parodied so much it’s unbearable now. The music and dancing just can’t stop this being a yawnfest.

Give Footloose the boot.