Kenny is a mockumentary which follows Kenny Smyth (Shane Jacobson), who works for a portaloo company in Australia. 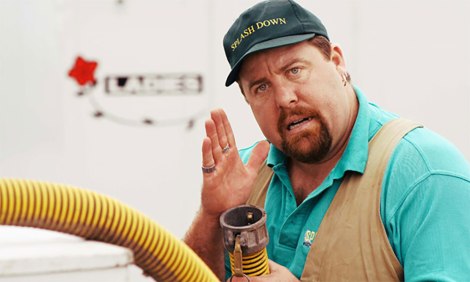 The style of the film is similar to previous mockumentary comedies like This is Spinal Tap and The Office, but the character of Kenny himself is far more likeable than their narcissistic stars, talking about his business (no pun intended) with the utmost sincerity.

He’s slightly reminiscent of Wikus (Sharlto Copley) in the first half of District 9, with his pleasant, even-tempered personality, and a kind of simple wit consisting of metaphors and analogies for his work which provide a lot of laughs. He’s a man who deals with human faeces for a living, but he’s not prepared to let it get him down. Be warned, there are a lot of shit jokes here, but the way they’re delivered in a dry, deadpan way means they’re the funniest shit jokes you’ve ever heard.

Kenny was written by its star Shane Jacobson and his brother, Clayton Jacobson, who directs and also stars as Kenny’s brother. The organic origins of the character shine through giving the film a naturalistic feel akin to Ben Wheatley’s Sightseers. Jacobson’s son and father also star as Kenny’s onscreen family.

But the most important thing about Kenny is that it’s very very funny. Laugh-out-loud from start to finish, it’s incredible that it’s not more widely known.

One response to “Kenny”