Almost 20 years on, this doesn’t quite deserve its reputation as one of the worst comic book movies ever.

In a terrifying dystopian future, where Sylvester Stallone wears painfully tight trousers, the Judges deal out rough justice, acting as jury and executioner. Imagine the Metropolitan Police but with less corruption. There are no trials and no due process, with suspects being punished on the spot, that is until Dredd is wanted for a murder, at which point he’s put on trial.

What can certainly be said of this film is it’s of-its-era. Clearly the effects make it easy to place chronologically, but it was also around the time of Joel Schumacher’s Batman films, where comic book meant campy fun. The actors ham it up with cheesy kiss-off lines, and a sense that this could never be a serious film. It’s a bit like Demolition Man in this way, and also in the fact it’s pretty moronic from start to finish.

But there are actually some fairly neat effects. The futuristic metropolis of Mega City One is fantastically created, with high speed hovercar chases and cameras sweeping across the skyscrapers.

The main reason, I think, for its reputation, is Stallone’s performance, which is truly awful. He has no idea how to play this character, and brings nothing to the role other than his physical presence. Just watch the above clip. The rest of the cast is pretty dire too, with the exception of Max von Sydow, who does his best to lend the film some gravitas.

But Dredd is actually a more fleshed out character here than in his 2012 re-imagining, which is to its benefit. Karl Urban’s version was a mumbler in a mask, doing his duty, nothing more. Here we actually see Dredd’s character, and get to understand something about his past. He’s still a no nonsense tough guy, but we also get to find out why. This upset some fans, who didn’t want to see the head beneath the helmet, but I think it works better.

The plot is pretty straightforward sci fi fare, but is again more fleshed out than the remake, which was pretty much one long action sequence. But like that film it suffers from the fact we’re asked to side with the morally dubious Judges and the brutal status quo they preserve, neutering the impact of the sci fi ideas on display here.

Overall this is silly but enjoyable popcorn nonsense. Stallone is awful, but since when did that make a film unwatchable? 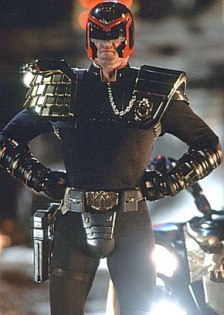