After watching The Punisher, I was astonished to read that it was made in 2004. This is, in part, due to the fact most of the action is done in camera: real explosions real car chases, real stunts. But it’s also due to the fact this level of violence and simplicity of plot haven’t been anywhere else since the mid nineties. And it features John Travolta.

Cop Frank Castle (Thomas Jane) kills a man in a sting, who unfortunately turns out to be the son of crime boss and owner of a major corporation Howard Saint (Travolta). Saint takes vengeance by massacring Castle’s entire family. After Castle is shot multiple times, blown up, drowned and carelessly left for dead without checking if he survived he goes to hunt down the people responsible.

This is a film which relishes in brutality, with extreme violence only watchable because of how ridiculous it is. It makes Kill Bill look like Hug Bill. It uses every action movie trope and is awash with clichéd dialogue. The only thing about it that looks like it was made in the last 15 years is the slickly made opening and closing credits, but when the best thing about a film, is the way they’ve presented the name off the boom operator, you know it’s in trouble.

It’s more full of holes than an emmenthal sandwich in a potholler’s lunchbox, while he’s watching Holes. Castle’s first act on being returned to full health by a witch doctor is to reveal himself to his former police colleagues (who play no further role even when a series of mass murders take place), but also to the people he plans to kill, thereby losing the single biggest advantage he has against them and drastically decreasing his chances of achieving his goal.  I could list more examples of coincidence and nonsense that plague this screenplay, but the internet might run out of storage capacity. 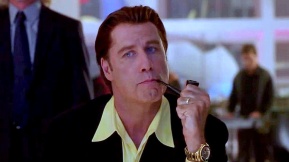 The scenes of Castle’s idyllic family life are so corny I’m expecting to see  small pieces of them in my faeces. The child’s last act to his father before he’s killed is to give him his trademark black t-shirt with a skull on it that he claims to have bought at the mall, even though he’s about ten. With parenting like that it’s amazing he didn’t die sooner.

The only way this scene could be less subtle is if the child (Marcus Johns) also gave him an AK-47 and a couple of hand grenades. The kid is so annoying it’s hard to see why Castle is so angry at his death. He got rid of the awful brat without even having to pay child support. If anything he should be sending Saint a basket of mini-muffins. It’s so over the top I wish they’d gone the whole way and adapted the comic book crossover  with Eminem

But in spite of the never-ending caverns of stupidity, it largely forgets its a comic book movie, without about as much style as it has substance. While it’s an origins story for a Judge Dredd-esque tough guy who deals out, you guessed it, punishment, it’s dressed up as a vengeance-fuelled crime caper. There’s none of the comedy of Judge Dredd or the unique visuals of Dredd 3D, giving this an altogether more unpleasant feel. Yet it still has the audacity to include moralistic speeches about how certain kinds of behaviour aee justified when the law fails. That is, mass murder.

Another film it feels close to is Cobra, down to monotone-mumble-monger Thomas Jane in the lead role as a feeble Sly imitation. But it lacks Cobra’s humour (and product placement). It would be much better if they used the real Sly, although memory of his Dredd might cause feelings of dread in audiences and money men alike. Instead nobody Thomas Jane gives a career-killing performance that makes John Wick look like John Rambo. While supposedly motivated by the massacre of his family he displays an almost Vulcan-like lack of emotion. Actually he might have been good in Star Trek Beyond.

The names – Castle, Saint, Glass, Spoon – are all stupid and annoying, and grate on the ear throughout. The only other Castle I can think of is Barbara, and she doled out a completely different type of social justice. Although it does break ground by having a gay underworld thug – the best friend of Saint- which is the only element of social progress in an otherwise tremendously dated film.

Yet incredibly, it builds up to such a loud climax, and the action is well-enough done, that by the big final showdown I was actually almost starting to enjoy it a bit. It really benefits from the amount of stuff they blew up for real and recaptures some of the over-the-top fun of 80s and 90s action films. But as a comic book movie, an origins story, a character study, an exercise in narrative and the start of a franchise it’s a complete  and utter failure.

One response to “The Punisher”