The US Civil War era epic follows a young girl called Scarlett (Vivien Leigh), the daughter of wealthy plantation owners in the Old South. It opens with her pining after the local men in scenes which bear some resemblance to a Much Ado About Nothing style romantic drama, but when the war breaks out the men are sent away, forcing the women to face the end of their way of life. As defeat looms for the South, the war threatens to defeat the survivors in every possible way. 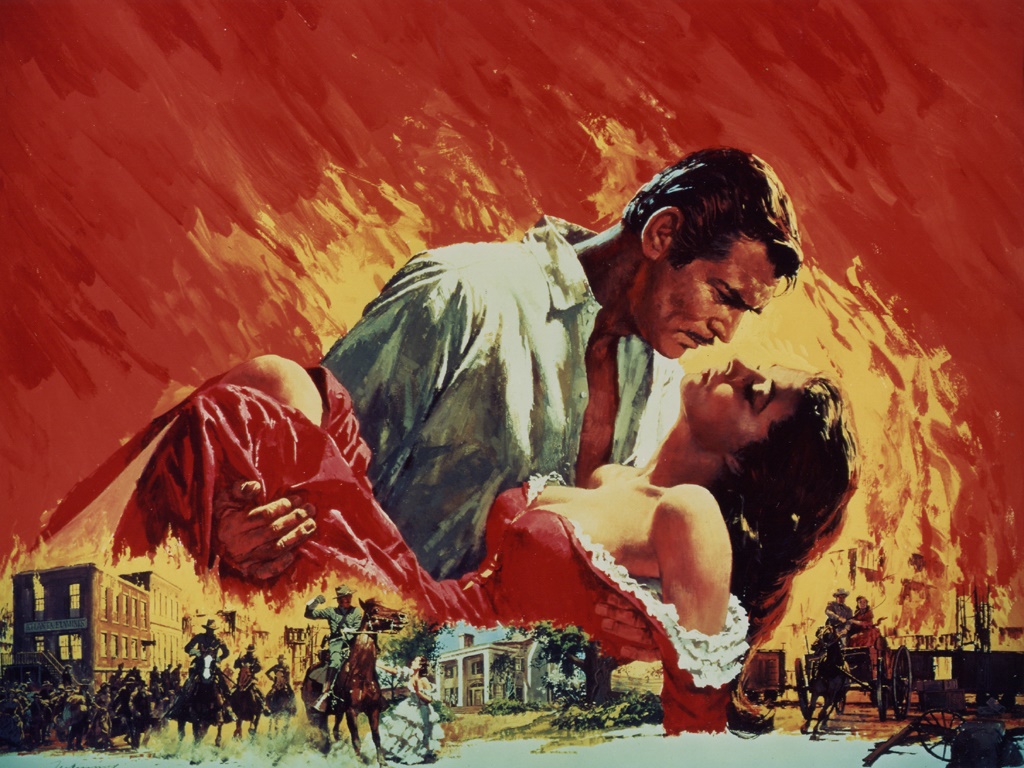 During the film’s opening minutes I was filled with dread. Posh people fussing over who fancies whom reminded me of what I assume Downton Abbey is like, which is why I’ve never watched it. “Four hours of this”, I thought, “damn”. But like all great epics it encompasses a huge range of genres and moods over a very long time period. Most of the film is pure Hollywood melodrama, of a sort that you’d never get away with these days.

But it takes place against the backdrop of the Civil War, so contains the horror of armed conflict, as well as a tale of survival in brutal circumstances, like Les Miserables, except they talk properly. With a strong female lead, this is in many respects a coming of age story, and in spite of some very conservative views, it’s also progressive in its story of a woman overcoming the odds in a difficult time by stepping outside the role society has designated for her.

That’s not to say the high school “who fancies who” stuff ever completely goes away, and the Scarlett’s obsession with pursuing particular men, with all the aplomb typical of this archaic view of sex and gender rolls, never completely stops being grating, but as the drama increases through the film and the rousing score comes in, it’s impossible not to get swept along, and ultimately blown away by it.

The aspect which has aged worst is the film’s taking the side of rich, white slave owners in the South. At one point Scarlett shouts at, threatens to whip and then hits a young slave girl in a very uncomfortable scene, and while she is supposed to be a flawed character, her attitude to slaves is never presented as one of her flaws. It can’t even use the Zulu excuse of just wanting to depict historical events without judgement, as this film is an open love letter to the Old South. Here are the words onscreen at its opening:

There was a land of Cavaliers and
Cotton Fields called the Old South. . . .

Here in this patrician world the
Age of Chivalry took its last bow. . . .

Here was the last ever to be seen
of Knights and their Ladies Fair,
of Master and of Slave. . . .

Look for it only in books, for it
is no more than a dream remembered,
a Civilization gone with the wind. . . .

It’s testament to how good this film is that it’s brilliant in spite of its insanely rose-tinted view of a brutal and unpleasant time in history. Compare it to Civil War era Westerns like The Good, the Bad and the Ugly, which are far from yearning for the good old days, and you see just how committed it is to glorifying the time period.

But it’s from this love of the setting that such a rich and fully realised world is put to screen. The costumes, for example, are outstanding, and it enjoys one of the best scores in movie history. There’s also some stunning, and often brilliantly innovative cinematography to match the drama.

At four hours long, Gone With the Wind certainly isn’t a breeze, but it’s so epic, so dramatic and so vast in its reach that it will take your breath away.

8 responses to “Gone With the Wind”