“This film should be played loud!” So begins Martin Scorsese’s The Last Waltz, and the careers of Michael Bay and Zack Snyder.

Not to be confused with Take This Waltz or Christoph Waltz, The Last Waltz is a 1978 concert movie, documenting the final performance of Canadian-American rock group The Band.

Taking a break from directing New York, New York, young filmmaker and rock ‘n’ roll fanatic Scorsese captured the 1976 concert, held in the salubrious surroundings of Bill Graham’s Winterland Arena in San Francisco, decked out with props borrowed from the San Francisco Opera and chandeliers from Gone with the Wind.

Armed with 7 cameras operated by some of Hollywood’s finest cinematographers, including Michael Chapman (Taxi Driver, Raging Bull) and Vilmos Zsigmond (Close Encounters of the Third Kind, The Deer Hunter), Scorsese meticulously crafted this rockumentary giant, cutting the show together with interviews with The Band – most prominently guitarist and songwriter Robbie Robertson, much to the annoyance of certain other Band members.

This was partially due to Scorsese’s admiration of Robertson. According to the film’s producer Jonathan Taplin, who discussed the movie after this special screening, the two were good friends at the time: “They were living in the same house because they’d both destroyed their marriages with cocaine.” Robertson also happens to be the most eloquent (and lucid) Band member, and the only character saving the film from going full Spinal Tap. 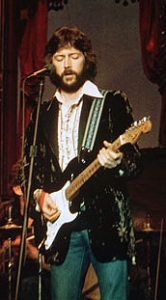 “We wanted it to be more than just a concert,” he explains. “We wanted it to be a celebration.” As such, The Band invite along a few of their friends; “Some of the greatest influences on music on a whole generation.” People like Eric Clapton, Joni Mitchell and Bob Dylan, whom The Band had backed in the ’60s.

The show itself is wonderful, everyone clearly having loads of fun on stage. Highlights include Dr. John, Muddy Waters and Van Morrison, wearing a sparkly jacket and a t-shirt that looks at least two sizes too small. Meanwhile, Neil Young performed with a cocaine rock falling from his nose that cost $10,000 to edit out in post-production. That’s one expensive coke habit.

Less impressive are Neil Diamond and the way the song ‘Chest Fever’ is teased and cruelly cut, before we even get to hear the lyric: “I feel the freeze down in my knees.”

But the diverse selection of art on display reflects the melting pot of styles that made up ’70s pop culture, particularly in San Francisco – not just the music, which encompasses everything from folk and gospel to electric blues and yodelling, but also poetry, represented here by Beat icon Lawrence Ferlinghetti.

True to its aim, this landmark concert feels like a celebration of all that rock had achieved so far. It also appears to mark the end of an era; Led Zeppelin’s lauded double-album ‘Physical Graffiti’ and AC/DC’s debut record ‘High Voltage’ had been released the previous year, continuing to drive rock music in a much heavier direction than The Band’s increasingly anachronistic roots sound.

After 16 years on the road, The Band decided to call it a day. “The road has taken a lot of the great ones,” Robertson reflects. “It’s a goddamn impossible way of life.” Tell that to Mick Jagger. But one could hardly ask for a better sign-off than The Last Waltz, a labour of love and technical marvel that’s dominated the genre for 40 years. If they’re The Band, this is The Rockumentary.