How have I gone 24 years without seeing The Sound of Music, the film that trounced Gone With the Wind‘s box office record? It’s a particular marvel since I realised I already knew about 70% of the plot and the words to most of the songs. Such is its cultural significance. 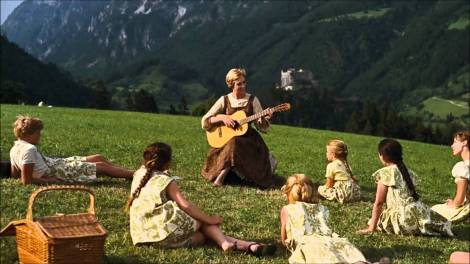 It’s a film that won’t win any prises for its subtlety, but it doesn’t need to. Finding its feet somewhere between Mary Poppins and Rebecca it follows the young Maria (Julie Andrews),  a troubled nun who moves in with a cold, distant man with a recently deceased wife, and finds her true calling by looking after the family’s children.

Andrews is perfect in the lead role. Her prior experience playing a musical nanny makes her the natural choice, after all. Her vocals outshine everyone else and she plays the character equally well through the entire arc, from will o’ the wisp, happy-go-lucky nun to von Trapp family matriarch. But where Mary Poppins used a touch of magic to win over the children and melt their father’s heart, Maria does it with only the power of song. Admittedly Poppins had a bigger challenge, since the children in her film are the undead. Christopher Plummer is also excellent as Captain von Trapp.

The surging score brings the film to life, and it has the advantage over many musicals in that pretty much all the songs are part of the plot. This avoids the feeling of them being shoe-horned in or leaving you wishing they’d get through the singing so we can find out what happens next. The Sound of Music without the music would be like Blade without the ass-kicking. Add to this a backdrop of scenery that looks like it was provided by the Austrian Tourist Board and you have the best musical ever. And now I really hate the Nazis.

4 responses to “I’ve Never Seen… The Sound of Music”