In Wallace and Gromit’s 2005 cinematic debut, our plasticine heroes run a humane pest-control service called Anti-Pesto, there’s a were-rabbit on the loose, and the Giant Vegetable Competition is fast approaching. Typical.

This satire of middle-England makes The Curse of the Were-Rabbit feel like a clay version of Hot Fuzz, with a similar vein of cineliteracy; there are references to The Curse of Frankenstein, The Wolf Man and King Kong, with a title seeped in Hammer horror history. Claymation is used as a fun vessel for horror just as in ParaNorman, which is wonderfully kid-friendly, and the films of Lee Hardcastle, which definitely aren’t. 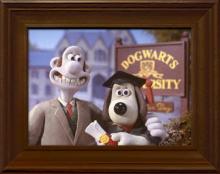 The painstaking process of stop-motion animation, even digitally assisted as it is here, ought to drive anyone crazy, or at least force them to keep things as simple as possible. But in the case of Aardman the opposite seems to apply. Ingeniously intricate contraptions, impossibly detailed sets and endless background gags are beautifully rendered in clay; it’s simply mind-blowing to anyone with the kind of attention span oh look over there it’s a tree.

Nick Park and Steve Box direct with care and joy, giving Wallace and Gromit their enduring appeal. It’s a sweet friendship between the silly but enthusiastic inventor and his silent but expressive dog; they’re like the Alex and Dan of plasticine. The superb Peter Sallis is joined by an all-star voice cast that includes Helena Bonham Carter, Liz Smith and Ralph Fiennes, whose talent as a comic actor can not be overstated.

Most importantly, The Curse of the Were-Rabbit is funny from start to finish, just like Chicken Run before it. Aardman never miss a chance for a smart pun, a humorous reference or a sight gag. As in other great animations such as The Simpsons, the film is so packed with clever details that it’s impossible to get them all in one or ten viewings. Lovingly animated, horror-literate and gleefully funny, The Curse of the Were-Rabbit is a joyous celebration of cinema, plasticine and cheese.

2 responses to “Wallace & Gromit: The Curse of the Were-Rabbit”