At two and a half hours, this is a thorough documentary that leaves no stoned unturned. Stone, sorry. The screen vibrates with love for a man who was a musical genius and remains a cultural icon. He’s variously described as charming, good-looking and competitive by a whole host of contributors, including Bunny Wailer, Jimmy Cliff and even former Jamaican prime minister Edward Seaga.

The film interestingly delves into the incredible political significance of the dreadlocked guitarist who came to represent Jamaica, reggae and pot. His beautiful music brought people together, and not just in some abstract hippie sense; he actually became involved in peace talks between warring factions in his home country, so great was his status and influence. His message of peace, empowerment and unity transcended political division.

But the film is honest about Marley’s personal life, with one contributor remarking that Bob was only faithful to Jah and not to women; the man had 11 kids by 7 different mothers. But nobody’s perfect; for one thing, Bob was a huge football fan. We learn how he used to smoke a joint then go for a run. Go for a run?! Shouldn’t that be eat a sandwich and watch The Wizard of Oz? But his devotion to Rastafari went much further than Snoop Dogg’s love of ganja; his religiosity is presented as borderline fanatical, making him the most successful religious musician since Cliff Richard. 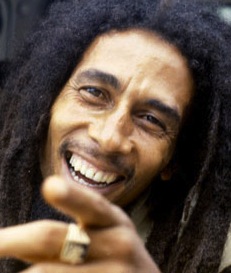 Most important, though, is the brilliant music of Bob Marley and the Wailers. The film documents Jamaican music’s transition from the beery party sound of ska to the spiritual weedy sound of reggae; from cha to cha-ka. Marley’s music followed a similar trajectory; from ska to reggae to his own unique sound, full of soul and politics and poetry. The movie’s excellent soundtrack and concert footage showcase Bob’s genius songwriting, beautiful voice and energetic dancing, though the absence of Buffalo Soldier is a glaring oversight.

Macdonald lovingly weaves the music with wonderful footage, which includes extraordinary scenes of a concert in Zimbabwe where riot police gassed the entire crowd. As men, women and children cover their mouths and run for the exit, Marley stands his ground and keeps on singing. There was no stopping Bob Marley, not even multiple gunshot wounds; the result of a 1976 assassination attempt, presumably by someone whose other targets included Jerry Garcia and Santa Claus.

Then in 1981, Marley died from cancer at the age of 36. The movie’s footage of his funeral resembles the procession scene in Gandhi. Or Gandhi’s actual funeral. Bob Marley is revered in a similarly quasi-spiritual manner, so profound was his effect on the world. Marley is a great documentary that celebrates Bob’s tragically short life; one of sex, drugs and reggae. It covers his journey from poverty to superstardom with love, depth, and loads of enormous Jamaican hats.