Having attended an all-night marathon of the Scream quadrilogy at Leicester Square’s wonderful Prince Charles Cinema, please indulge me as I deliriously gush about three great slasher movies and Scream 3.

Scream opens with an ingenious pre-credits sequence that encapsulates the movie’s postmodern wit and breathtaking horror. “Do you like scary movies?” it asks, laying out the rules of the slasher movie and then gleefully breaking them.

Kevin Williamson’s self-aware script sparked a bidding war in Hollywood, which was eventually won by the Weinsteins. Originally entitled Scary Movie (a title later used for the Wayans brothers’ spoof of Scream, apparently not getting that Scream was already a parody), the screenplay was a hip homage to slasher movies – making A Nightmare on Elm Street‘s Wes Craven the perfect choice of director.

Craven brutally dissects the slasher sub-genre he helped to create, and reveals its insides to be made not from fleshy meat, but a simple formula; one followed by every Halloween ripoff ever made – and in one particularly brilliant scene (though every scene is brilliant), the characters actually watch Halloween and commentate on the genre. While some of the contributions are perhaps more intelligent than others (“I wanna see Jamie Lee’s breasts. When will we see Jamie Lee’s breasts?”), the film appreciates the way young people actually consume horror films and treats their fandom with respect – while satirising the scapegoating of violent movies and the demonisation of their viewers.

By populating a horror film with teenagers who’ve actually watched horror films, the veil is lifted and the formula exposed. Craven and Williamson then follow this familiar formula, but subvert it at every twist and turn. Craven at once slices open the slasher movie and makes a superior slasher movie in the process. Crucially, Scream is not above the genre, but a part of it – Craven and Williamson have their cake and eat it too; Scream is both a searing satire of slasher films, and the best slasher film out there. 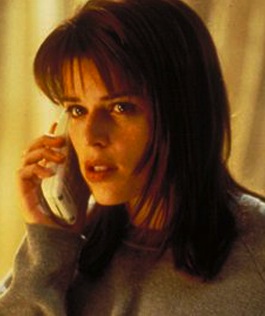 It all takes place in the fictional American town of Woodsboro; essentially Halloween‘s Haddonfield but with the Fonz as the local school principal. We meet the young Sidney Prescott, brilliantly played by Neve Campbell; the sexiest Canadian since William Shatner. Flawed, sensitive and packing a mean right hook, Sid is a far cry from “the big-breasted girl who can’t act who is always running up the stairs when she should be running out the front door. It’s insulting.”

Before you can say “don’t answer the phone”, someone’s trying to kill her; a knife-wielding maniac (threateningly voiced by Roger Jackson), wearing a Fun World mask based on The Scream by Edvard Munch – a mask that’s at once simple and menacing, scary and goofy, iconic and ironic.

The music also embodies the film’s combination of classic meets modern, with a superb score by Marco Beltrami, the inspired use of Red Right Hand by Nick Cave and the Bad Seeds, and even Moby’s First Cool Hive – probably the loveable vegan’s only appearance on a horror soundtrack.

Scream is edgy, subversive and great to look at – with the exception of Courtney Cox’s insane lime-green suit. She is perfect as “tabloid twit” Gale Weathers, a figure of pointed media satire and a stronger female character than most. She shares real chemistry with the hilarious Deputy Dewey, played by David Arquette; a sort of moustachioed Jesse from Breaking Bad. Cox and Arqeutte met on set and eventually got married – there’s just no accounting for some people’s taste in facial hair.

Skeet Ulrich, Jamie Kennedy and Matthew Lillard nicely round off this epochal horror film; one that marks out Craven and Williamson as a killer combination – if you ignore Cursed, which most people do. Whip-smart, pop-culture savvy and sharp as a carving knife, this is the perfect horror film. It’s a scream. 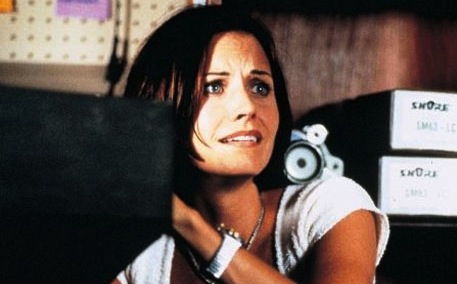 To quote Stu in the first film: “These days, you gotta have a sequel!” Particularly when the original makes as much money as Scream did – the highest-grossing slasher movie in US history. Sequels are part and parcel of horror movies, so Williamson already had Scream 2 ready for the following year; a loving send-up of horror sequels, with their higher body counts and lower overall quality.

The sequel kicks off with another fine opening scene, in which a couple (Jada Pinkett Smith and Omar Epps) go to the movies to see Stab; a slasher flick based on the events of the first film, alongside the worst-behaved movie audience since that cinema scene in Gremlins. 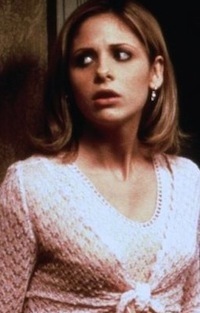 It’s smartly self-referential, satirises a movie industry that would make a trashy slasher franchise out of a real-life tragedy (starring Luke Wilson, in a self-deprecating send up of the first film), and even provokes a discussion about race in horror – “It’s a dumb ass white movie about some dumb ass white girls getting their white asses cut the fuck up.” I never said it was a PhD thesis.

Sidney’s back, with a shiny new boyfriend about whom we never really care. But Gale and Dewey are as adorable as ever, while Jamie Kennedy’s Randy is always a highlight. Imagine their surprise when Ghostface reappears, in the form of a copycat killer.

Evil seems to stalk Sidney like she’s Buffy Summers (Sarah Michelle Gellar), who actually shows up in Scream 2 as if to acknowledge Buffy’s significance to postmodern horror. She’s the focus of a stand-out sorority house sequence, from which Craven wrings every last drop of tension and blood – as well as a knowing discussion about sequels; “By definition alone, sequels are inferior films!”

Unfortunately, Scream 2 proves this theory – while the original was all killer, the sequel has a certain amount of filler. But there’s plenty more postmodern playfulness, exploration of horror films causing violent behaviour, and welcome additions to the cast – including Liev Schreiber, Timothy Olyphant and Portia de Rossi, who was also in Cursed. But we don’t talk about that.

Scream 2 made almost as much money as the original, so along came the threquel – and with it, another drop in quality, but this time much more profound. The story this time revolves around the cast of the new Stab movie, who Ghostface is killing off one by one. At the risk of sounding like Randy, there are three big problems with Scream 3.

1. Writer Kevin Williamson has been replaced by Ehren Kruger. The entire Scream franchise is Williamson’s idea, and his absence is sorely felt. The result is a witless cartoon, with all of the imagination and heart we’ve since come to expect from the writer of the Transformers sequels. Yes, apparently those films do have a writer. 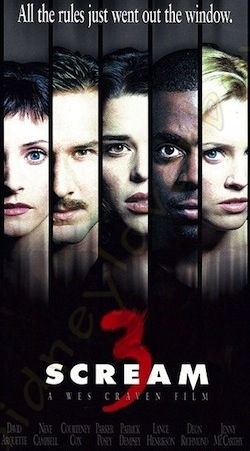 2. Dewey and Gale’s relationship is reset for no good reason. And weirdly, Courtney Cox has wandered in straight from the episode of Friends where Phoebe gives her Dudley Moore’s hairstyle instead of Demi Moore.

3. The script was rewritten to avoid insensitivity towards the Columbine High School Massacre of 1999. The rewrites, which are of course referenced in the script (“Has there been another goddamn rewrite?? How the fuck are we supposed to learn our lines when there’s a new script every 15 minutes?!”), involved shifting the plot away from high school/college and towards some unspeakably awful new Hollywood characters.

Scream 3‘s only redeeming feature is Crowded Elevator by Incubus on the soundtrack. But neither that nor appearances from Roger Corman, Lance Henrikson or Carrie Fisher are enough to save this toothless Scream picture. With no good jokes, scares or reveals, this film confirms Randy’s theory: “The horror genre was destroyed by sequels.” 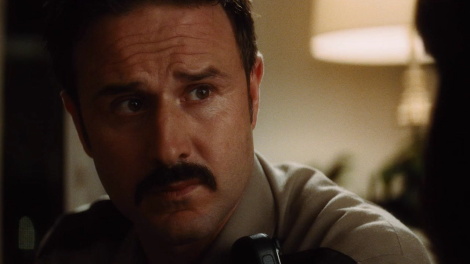 Remakes and reboots are as vital to slashers as sequels and gratuitous nudity. So, more than a decade later, Ghostface terrorised Woodsboro once again. Kevin Williamson is back (hooray!), and with him his razor-sharp dialogue and high-school setting. The film’s tricksy Russian doll opening brings us immediately back to Scream at its near-best.

Sidney returns to Woodsboro, accompanied by her publicist Rebecca (Alison Brie, which in my head I have to sing like Under The Sea – and now so will you). There’s also an all-new annoying batch of unlikeable teenagers to get to hate. To know, sorry.

These iPhone-fitted bundles of joy include Nico Tortorella as Trevor (boring), Emma “niece of Julia” Roberts as Jill (annoying) and Marielle Jaffe as Olivia (who?). In fact, the only new character with any substance at all is Kirby, well played by Hayden Panettiere. Of course the original Woodsboro kids were annoying, but at least they were memorable characters with varying degrees of psychotic charm. These new kids wouldn’t know charm if it attacked them with a knife. 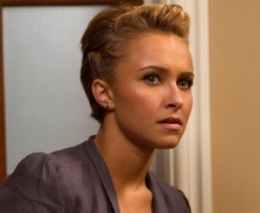 But they’re attacked with a knife nonetheless, with the kind of self-aware surprises glaringly absent from Scream 3 – not to mention the best ending since the first film. There are some superbly suspenseful sequences along the way; the parking lot scene is classic Craven tension. So don’t be put off by the 15 classification – the first for the previously 18-rated franchise.

The franchise’s unofficial theme song Red Right Hand is sadly missing, a bit like Rocky IV failing to include Eye of the Tiger. Nevertheless, Scre4m (pronounced Scream 4 and not Screefourm) is a strong return to form, with Williamson bringing back the metatextual commentary that initially characterised the franchise.

Actually, the focus on remakes is slightly confusing because Scre4m isn’t a remake – it’s a sequel. Nevertheless, it’s interesting to see Craven and Williamson pick at the corpse of the lifeless horror remake like vultures. As Gale says: “You do a remake to outdo the original.” But they never do.

So, four films, eight hours and 1,700 words later, we’ve reached the end of our Screamathon. Just like Ghostface, the seminal franchise refuses to die – there’s a TV show on its way later this year. But Ghostface keeps coming back because it could be anyone under that iconic black cloak; part of Scream‘s success lies in its element of mystery, making it giallo-esque in that respect. Admittedly, there’s not been a single convincing reveal since the original, but we’re always kept guessing as to who’s behind that terrifying mask – and I’m not talking about Courtney Cox. 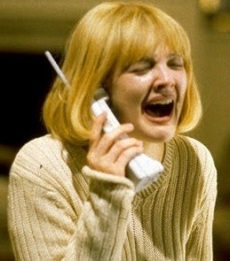 Craven deals in the horrors close to home, where your small suburban town is really a playground of monstrosity. The director and birdwatcher has matured since the savage, political, nihilistic films he made as a young man. Now he’s interested in conquering fear and overcoming evil, with the postmodern spin introduced in the brilliant Wes Craven’s New Nightmare – really the spiritual predecessor to Scream.

It’s this irresistibly ironic twist that defines the franchise, as Craven delivers a meta-masterclass in stalk-and-slash cinema. Yes it’s a big in-joke, but the emotional depth and strong characters actually lend it far greater sincerity than first meets the eye. Craven and Williamson don’t so much deconstruct the genre as disembowel it completely, before rebuilding it like a beautiful Frankenstein’s monster.

11 responses to “The Scream Quadrilogy”