You’ve seen him play a crazy dad in Breaking Bad, Godzilla and Malcolm in the Middle. Now, Bryan Cranston plays blacklisted Hollywood screenwriter Dalton Trumbo. Who also happens to be a crazy dad. 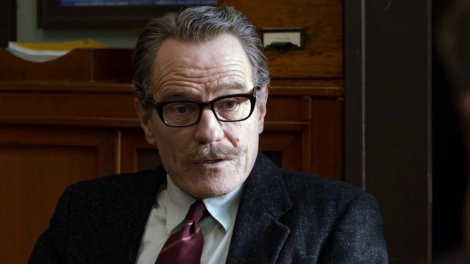 Opening in 1947, the drama revolves around the Hollywood Ten; a group of screenwriters and directors who were barred from working in the movie industry for suspected Communist affiliations. A Hollywood film about how hard the rich Hollywood folk were hit by the Red Scare does feel slightly insular and inconsequential, but the movie successfully presents an interesting case of people imprisoned for “Un-American Activities” – one of those delightful political euphemisms, which in this case means “drinking with Socialists.” Or Bernie Sanders rallies, as they’re known today.

Adequately directed by Jay Roach, the film follows the basic biopic structure: act of defiance, family bickering, Helen Mirren, rousing speech, end credits, go home and read about how much of it they made up. Some of the dialogue is eye-rollingly dumbo, and most characters simply serve as mouthpieces for particular viewpoints rather than actual people; as Trumbo’s wife Cleo, Diane Lane has fewer lines than Bryan Cranston’s face. But Cranston holds everything together as the eccentric and impassioned hero, whose name became as poisonous to movies as Robert De Niro’s.

Trumbo also features David James Elliott as John Wayne and Dean O’Gorman as Kirk Douglas, even though he looks more like Kirk Cameron. The rest of the cast includes Louis C.K., Alan Tudyk and John Goodman, reprising his role from Argo. This never reaches Argo‘s level, nor does it rival Good Night, and Good Luck. Nevertheless, it’s an enjoyable depiction of an important political chapter, highlighting the dangers of reactionary politics, ideological witch-hunts and their tendency to destroy livelihoods. Check it out if you like liberals, mad dads and Helen Mirren in silly hats.