Set in McCarthy era America, Good Night, and Good Luck is George Clooney’s 2005 drama based on true events – there are no ghosts in it, unless you count the spectre of communism. 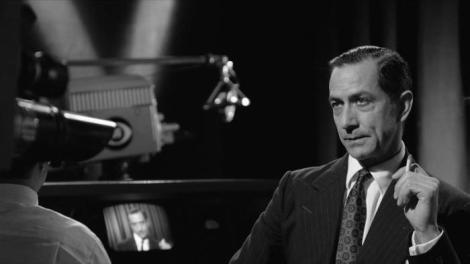 Named after the catchphrase of broadcast journalist Ed Murrow, Good Night, and Good Luck follows Murrow (David Strathairn) and his CBS team as they dare to stand up to Joseph McCarthy – the Republican Senator whose anti-communist witch-hunts rode roughshod over civil liberties, the rule of law and the lives of citizens.

The film is lent crucial authenticity by its smoky, jazzy, 1950s atmosphere, beautifully photographed in black and white by Robert Elswit. Not only does this mean that it looks great, it also allows archive footage to blend seamlessly with the action – a similar technique was used by last year’s No. Rather than having an actor play McCarthy he appears only in genuine clips, which adds to the reality of the piece. If it was made today they’d probably get Meryl Streep to play him.

Nevertheless, there is a strong ensemble cast at work here, including Robert Downey Jr., Frank Langella and Clooney himself. But although I called this George Clooney’s film, it actually belongs to David Strathairn thanks to the sheer conviction he brings to the lead role. Jeff Daniels also shows up, in case the film didn’t already feel faintly Sorkin-esque with its behind-the-scenes look at television and the essential role it ought to play. In this respect it’s similar to the BBC’s The Hour, focusing on the relationship between a country’s government and its broadcasters.

Good Night, and Good Luck feels crucially relevant. As Murrow asserted in 1958, television is too often used to insulate rather than to challenge; to distract rather than engage. If only he could see The X Factor, he’d die all over again. Meanwhile, McCarthy’s paranoia is alive and well as politicians insist on dividing citizens into “us” and “them”, whether “they” are communists, Muslims or immigrants. Just like Sidney Lumet’s Network, this is an intelligent film about television which becomes more apt by the day. When it comes to holding the powerful to account, the closest we have is Question Time.

Good Night, and Good Luck is available on iPlayer until August 17th.

3 responses to “On iPlayer: Good Night, and Good Luck”