Julia’s Eyes (Los ojos de Julia) is a Spanish horror film about a woman going blind, directed by Guillem Morales and produced by Guillermo Del Toro, who likes to promote promising filmmakers (with similar names to his). 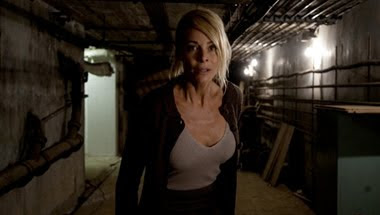 Released in 2010, Julia’s Eyes stars Belén Rueda as a Hitchcock blonde, as impressive here are she was in The Orphanage. The film once again makes chilling use of a 15 certificate, and while it doesn’t have the haunting sadness of The Orphanage, it does have a similarly spooky atmosphere that’s sure to test your (optic) nerves. 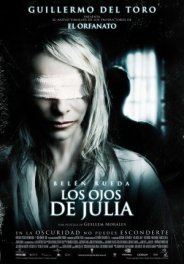 Morales makes strong creative choices, giving the viewer Julia’s perspective as her vision deteriorates and darkness closes in around her. When she can’t see, the camera avoids showing other characters’ faces entirely, heightening the sense of disorientation and displacement. It’s not a device intended to trick or deceive us, as attempted by less confident thrillers, but a crucial part of the story. Julia can’t see, so neither can we. This means we identify with her throughout, which makes the movie as sensitive as it is scary.

A needle-sharp exploration of sight, this is well worth seeking out by fans of Alfred Hitchcock, Brian De Palma and Dario Argento, but probably best avoided by the eye-squeamish community. Pupil-piercingly tense from start to finish, Julia’s Eyes is a film of great vision.