In the latest entry into the DCEU, a government operative (Viola Davis) rounds up a team of supervillains to save the world. What could possibly go wrong?

Everything. Suicide Squad is such a mess that it’s difficult to know where to begin. Let’s start with the premise: the government are afraid that the next Superman could be a terrorist who decides to blow up the White House. Their plan? To round up a team of known terrorists with superpowers and heavily arm them, displaying the kind of illogic reserved for DC movies and the NRA. By sheer coincidence, an evil witch (Cara Delevingne) immediately tries to take over the world, thus giving the Suicide Squad something to do.

So who are these unsavoury properties? Deadshot is a ruthless hitman played by Will Smith, an actor utterly incapable of villainy. His eyes are too kind. Then there’s Harley Quinn (Margot Robbie), basically a moron with a baseball bat and next to no combat ability. She’s also infamously the girlfriend of The Joker (Jared Leto), so perhaps not the best choice for enlisting in covert operations. 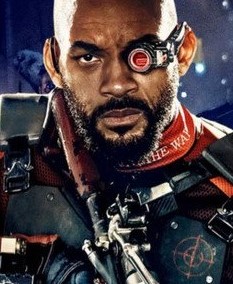 There’s only one person less suitable than Harley Quinn for tactical ops, and that’s Diablo (Jay Hernandez). Not only is he a pacifist, he’s also prone to accidentally catching fire and killing everyone. And then we have Boomerang played by Jai Courtney, who leaves a trail of destruction in his wake: the Die Hard franchise, the Terminator franchise, and now this. Plus some other ones but I don’t remember because I was too busy counting the money Marvel gave me to slate this movie.

They’re all introduced in an opening montage with pop music clearly chosen to show off how much money the studio spent. The soundtrack resembles a Buzzfeed list of the most overused rock songs in movies, from ‘Sympathy for the Devil’ to ‘Fortunate Son’, each one a painfully literal reference to whatever’s on screen. They stop just short of using Steve Miller’s ‘The Joker’ to introduce The Joker.

Then begins the movie proper, and – say it with me – it doesn’t make any sense. We don’t know who anyone is, or who they’re fighting, or why. Quite simply, there’s no storyline. Writer/director/pyrotechnician David Ayer continues to operate under the false assumption that brutal killings give his movies edge or depth, while stealing liberally from other films: jokes from Kick-Ass, action from Dredd and special effects from Blade: Trinity.

To prove that I’m not really in the pay of Marvel, here are three positives: 1) It’s better than Batman v Superman, by virtue of containing more than one colour. 2) Jared Leto is quite good, even though he’s barely in it. 3) Colonel Flag is actually a really great character… in M*A*S*H.

With that settled, let’s pretend we’re Harley Quinn and bludgeon this rotting corpse of a movie. It’s a film that screams insecurity, and I don’t just mean the way it leers over Margot Robbie with big guns and rock music. I’m talking about studio insecurity. Batman v Superman was notoriously grey and sluggish, so Warner Bros. panicked and took a pair of scissors to Suicide Squad. It looks as though they cut out all the exposition, added bad jokes, removed entire characters… And they kept going without realising, or perhaps not caring, that they’d accidentally edited out the plot.

Ultimately, it’s not really levity or saturation that determine the success of a movie; it’s storytelling. And it doesn’t even matter if the story is original – just look at the formula behind all those MCU films that end with a bright beam of light shooting from the centre of a city. But in pathetic pursuit of Marvel’s success, DC have noisily obliterated narrative in favour of filmmaking by beancounters, and ended up with a pair of movies that make no sense. None. Squat. Suicide Squat.

That’s the problem at the rotten core of Suicide Squad, an appropriate name for a film in the death throes of the DCEU, destroyed by its own hand.