This disaster (of a) movie opens with an explanation of the asteroid that wiped out the dinosaurs, delivered in voiceover by Charlton Heston – presumably because he remembers it first-hand.

65 million years later (it actually says that), there’s another asteroid headed towards Earth and it’s the size of Texas or Bruce Willis’ ego. There’s no reason for it to be so big; an asteroid one-tenth of the size would still obliterate all life on Earth. But this is a Michael Bay film, and he thinks that the bigger something is the more exciting it must be. 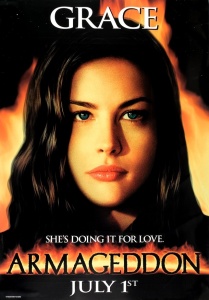 Doing what for love? Seriously, why is she even there?

Within the first 2 minutes, there’s racism, animal harm (both played for laughs) and some of the worst CGI I’ve ever seen – and I’ve seen The Phantom Menace. Bizarrely the movie was Oscar-nominated for its visual effects, but this was the same year that Gwyneth Paltrow won Best Actress so one can only assume that the Academy were suffering from mass delusions (and never truly recovered). Apparently the visual effects supervisor had a nervous breakdown, which is what you get for working with Michael Bay; a man who has been described by colleagues as everything from “a fucking arsehole” to “Hitler”.

NASA then hatch an ingenious plan to drill into and split open the asteroid and my head, so they decide to train “the best oil drillers in the world” to become astronauts in the space of 2 weeks. What? Why? – I hear you cry – wouldn’t it be easier to just train some astronauts to use a drill? Well, Ben Affleck reportedly asked that on set and Michael Bay had a pretty watertight answer: “Shut the fuck up.”

It’s basically this in movie form.

We then meet these deep-sea drillers, and they’re a bunch of the most obnoxious people ever put to screen. They would be; they’re horribly played by Bruce Willis, Owen Wilson and Ben Affleck, who’s sleeping with Willis’ daughter Liv Tyler. Again, Bay thinks this is a very funny way of creating tension. It isn’t. Some of his other hilarious comedy targets include women, Russians and Greenpeace. Because it’s about time someone put them in their place.

Bay’s attention-deficit directing means that no scene is longer than about 20 seconds and no shot longer than about 2. He even drags usually reliable actors down to his level including Billy Bob Thornton, William Fichtner and  Steve Buscemi, who develops a case of “space dementia.” I don’t know what that is, but if it means not remembering Armageddon then I’m deeply jealous.

Thornton plays the lead NASA scientist who says things like: “For 30 years, they questioned the need for NASA. Today, we’re gonna give them the answer.” And when asked about NASA’s contingency plan: “No, we don’t have a backup plan. This is it.” This all strongly suggests than Michael Bay doesn’t particularly trust so-called scientists but thank god there are salt-of-the-Earth heroes out there working with suggestively oversized tools to step in and bail them out, even though when we meet Bruce Willis he’s indiscriminately firing a shotgun on an oil rig.

The less said about this scene the better.

According to IMDb it took 6 people to write this film, including J.J. Abrams (disappointingly) and Punisher writer/director Jonathan Hensleigh (unsurprisingly). This means it took 6 people to come up with dialogue like: “Man, what are you doing with a gun in space?”

A few years ago Bay apologised for the film in the least convincing way possible, blaming the studio for taking control away from him. Having watched more of his films than I’d care to admit,  I know what a Michael Bay movie looks like – and this has Bayhem written all over it. It’s cynical, bone-headed moviemaking with zero respect for its audience. It doesn’t require an apology so much as a blood sacrifice; his own.

Armageddon is an explosion in a stupidity factory; two and a half hours of noisy, inane schlock, where fetishistic American flags appear out of nowhere and deep-sea drilling saves the day. There’s no logic, characterisation or any reason why we should care, and it looks like one of those Syfy channel movies with names like Mega Python vs. Gatoroid or Cube 2: Hypercube. Except it had a budget of $140 million and four Oscar nominations, including for Aerosmith’s ‘I Don’t Wanna Miss a Thing.‘ Personally, I really wish I had.