The story of this documentary’s path to cinema screens is a remarkable one. Cohen greatly disliked the idea of being the subject of a documentary and was dissatisfied with the original cut, in spite of it being highly regarded by others. Director Tony Palmer then took the unusual step of providing Cohen with an assistant editor and allowing him to do whatever he wanted with the footage.

Two years and more than a quarter of a million dollars later he still wasn’t satisfied and the film was lost. That is, until in the early 2000s when Palmer chanced upon the original reels and pieced it back together from the original soundtrack, which survived. And thank goodness he did, because this is one of the best documentaries ever made. 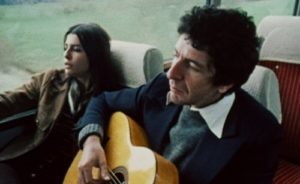 Due to Cohen’s reluctance to be a subject and obvious dislike of answering questions about himself and his work, the film wisely lets the songs speak for themselves, linked together by small but revealing scenes from the tour which reveal aspects of Cohen’s complex character. Filmed without any PR or management involvement it gets very close to its famous subject.

As with any musical tour, things don’t always go to plan, and Cohen’s responses to unforeseen events are particularly interesting. He shows a remarkable ability to speak in a lyrical way, and is even able to improvise onstage. He’s often shy, but totally uncompromising where his creative integrity is concerned. But while his diverse talent will come as a surprise to no-one, his humour is also allowed to come through here too.

The music is beautifully recorded and shot. Filmed on a shoestring budget with just one camera and four crew members, it manages a wonderful quality of cinematography during the musical numbers. Cohen’s face is framed against the lights or shown from the side as a silhouette.  In the beautiful recordings his voice has never sounded better nor the emotion of his songs more authentic. 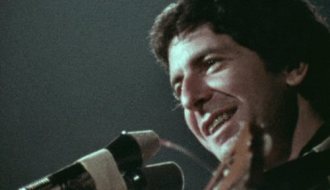 Bird on a Wire isn’t a discursive or argumentative documentary that seeks to influence opinion on its subject in a particular direction. It’s a portrait of a man who couldn’t be put into a box in anything he did, but strove for authenticity above all else. It’s gripping, emotional and funny, and feels all the more poignant after Cohen’s passing last November.

One response to “Leonard Cohen: Bird on a Wire”