If I were to recommend a mostly-improvised 2-hour-40-minute film, more than one-third of which is country music, you’d probably say: “How did you get into my house?” But Robert Altman’s 1975 classic deserves its reputation as a great American movie.

Not to be confused with the Connie Britton show of the same name, Nashville follows no fewer than 24 characters through the city’s giant country music industry, while a populist presidential candidate attempts to stage a concert rally.

Released and based around the USA’s Bicentennial celebrations, the film uses the all-American institution of country music to take sweeping satirical blows at a nation honouring itself blind in the midst of political scandal, assassinations, war and social unrest.

Altman’s multi-layered approach and rejection of conventional narrative reflect a shambolic society where dreams are made and, more often, broken. He famously developed multitrack recording technology to enable his trademark overlapping dialogue, because to Altman America is a lot of different people talking over each other. The subtitles on his movies must look like a crossword.

Widely considered Altman’s masterpiece, the film is ahead of its time in a number of ways. Not only does it clearly influence many significant modern American filmmakers, most notably the ensemble pictures of Paul Thomas Anderson, it also appears to predict the rise of Donald Trump.

The closest the movie comes to an overarching storyline is the efforts of “Replacement Party” presidential candidate Hal Phillip Walker to hitch his wagon to country music stars, who would come to outnumber actual audience members at Trump’s inauguration.

Although we never see Walker we learn that he’s anti-establishment and crazy, and we hear from his speeches that he’s more articulate than Trump, proving that even a social critic of Altman’s cynicism could never have foreseen such stupidity.

He ironically appropriates earnest-sounding country songs written by the cast who perform them live, including Henry Gibson’s hilariously mawkish ‘For the Sake of the Children’, in which a married man explains to the woman he loves that their affair can’t continue.

A sprawling musical, satire and American epic, Nashville is unparalleled in its scope, and as sharp in its insight as Sueleen is flat. It reminded me that last month the Country Music Awards had to apologise for trying to ban journalists from asking questions about guns and politics, giving me a terrifying vision of a future Trump tweet: 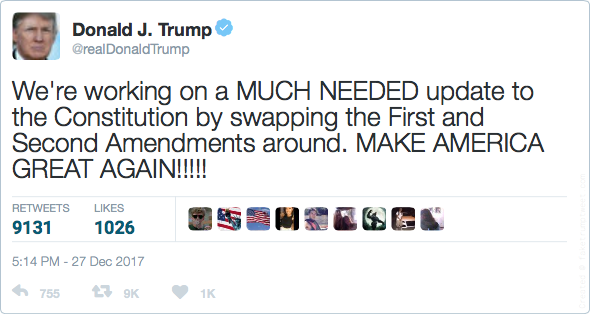