We look back on The Talented Mr. Ripley to celebrate Gwyneth’s Paltrow’s engagement, which she’s been plugging profusely on Goop. She’s always plugging something profusely. But sadly never her mouth. 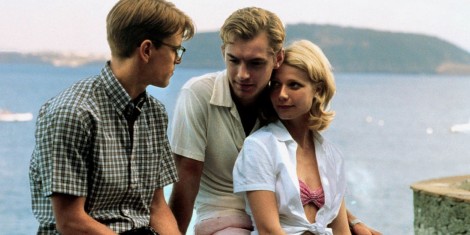 Appropriately enough, this 1999 psychological thriller is the story of a fraudster. Adapted by the late Anthony Minghella from Patricia Highsmith’s novel, it follows the young Tom Ripley (Matt Damon) to coastal Italy where he meets wealthy socialite Dickie Greenleaf (Jude Law) and his fiancée Marge (Paltrow). He falls in love with Dickie’s lifestyle, even though it involves living with Gwyneth Paltrow. Tom’s obsession with Dickie grows, and he’s trying on his friend’s fashionable leisurewear before you can say Pringle White Female.

This film not only inspired Jennifer “J. Law” Lawrence to also steal Jude Law’s name, but additionally was one of the driving factors behind the creation of The Room. In the book The Disaster Artist, Greg Sestero describes taking Tommy Wiseau to see the movie in the hope that Tommy would see the obvious parallels between Tom and himself. He did not. He was however deeply affected by the picture and inspired to make his own great American drama. He even named Sestero’s character Mark, “like this guy Mark Damon.”

It also belongs in the category of films that are actually about Donald Trump, along with Nashville, Gladiator and The Boss Baby. There are lines that could be straight out of Michael Wolff’s Fire and Fury: “He has so many realities and he believes them all. He lies. He lies and half the time he doesn’t even realise he’s doing it.” Even their names sound similarly farty: Trump and Ripley. Where they differ is of course that Ripley is talented, as opposed to The Talentless Mr Bigly.

An interesting companion piece to Catch Me If You Can, the two films would later provide the perfect actors for the identity-fluid protagonists of The Departed. A number of coincidences and plot holes make the drama less believable than the Frank Abagnale movie, but what it lacks in plausibility it makes up for in Hitchcockian intrigue and compelling performances. Law, Cate Blanchett, Jack Davenport and Philip Seymour Hoffman are on fine form, while Damon skilfully conveys Ripley’s complex, murky psychological motives.

Boasting gorgeous locations, groovy jazz and classy execution, this is the best Ripley movie since Aliens.