The sequel no one wanted to a film no one liked, Jumanji: Welcome to the Jungle combines the pointless special effects of Jumanji with the generic action of a Dwayne ‘The Rock’ Johnson movie. 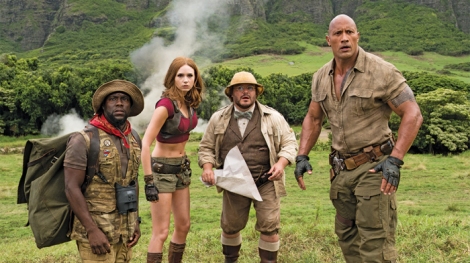 This new adventure-comedy updates the 1995 Robin Williams bored game movie by making it about a video game because that’s what kids are into right? This reboot seems all the more superfluous as the original was already inspired by video games, though I’m using the word “inspired” in its loosest possible sense. If there’s any inspiration in Welcome to the Jungle it’s that the title was inspired by Sony employees crying: “It gets worse here every day.”

Four high school kids wind up in detention, each representing a different stereotype like in The Breakfast Club: the jock, the dork, the pretty one and the other one (who is also pretty, just not pretty enough). They find the Jumanji cartridge and start to play, only to be sucked into the conceptually-confused game and transported into the bodies of their avatars: The Rock, Karen Gillan, Kevin Hart and Jack Black. Yep, Kevin Hart and Jack Black in the same film. It’s exactly as annoying as it sounds.

For some reason the two male and two female characters turn into three male and one female, when they could easily have kept the gender balance while still hi-lariously gender-swapping some of the characters. Maybe Sony is scared of having too many women in their films after the Ghostbusters furore cost them so much money. The low-prioritisation of gender equality is made more obvious still when Karen Gillan’s character appears in a jungle-inappropriate skimpy costume, but complains about it which I guess makes it OK. And when her combat style involves doing sexy dancing, I guess that’s fine too. Because she made a comment about how sexist it is.

Welcome to the Jungle‘s distinct lack of personality makes it unlikely to appeal to fans of the original (either of them) although it does continue its theme of being generally inappropriate for kids, supposedly the target market. Like that other recent The Rock reboot of a ’90s property, Baywatch, the film features so many dick jokes it’s more like Welcome to the Freudle. And even though that’s barely a joke, it’s funnier than anything in the movie.

There are no fun and games here, just two hours of stampeding animals and noisy schtick, and in the process the characters learn something about themselves: that cashing in on a recognisable name with even the most tired premise can be extremely profitable and creatively bankrupt at the same time. Retro? Not really. Retrograde? Absolutely.

2 responses to “Jumanji: Welcome to the Jungle”